Skip to content
Loading...
Latest articles
USPresents: Two Wandering Spirits, Three Government Officers (and other assorted ghosts)
I Am What I Am – The Latest Animation Milestone via Hyper-Realistic Lion Dances
Harvest Moon – A Cafe Pop Playlist by Where Are The Fruits
Characteristics of Modern Living Exhibit A
Dances with Mushrooms
CAC EventsInterviews 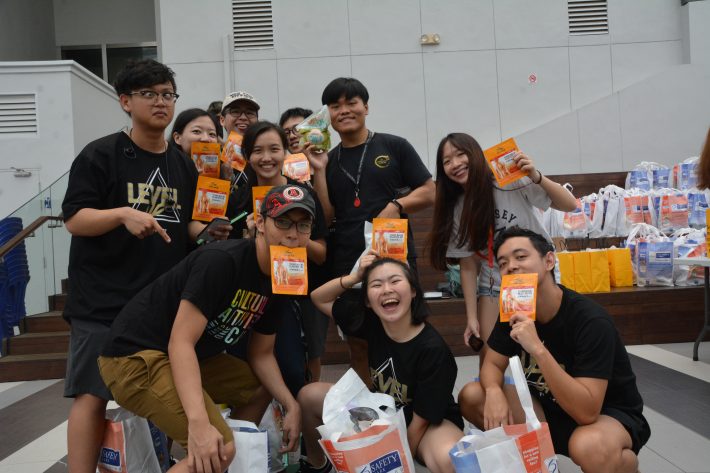 As the academic year neared an end and the dread of sitting for the final examinations began to settle in, the Cultural Activities Club (CAC) decided to lighten the mood and turn it into a cause for celebration with the annual CAC Day 2019!

A day solely dedicated to celebrating all things CAC, CAC Day (previously Wearfare Day) was a fun-filled and lively event. Proudly co-organised by the CAC Business Committee, Executive Committee and Publicity Committee, the day was filled with exciting performances and activities, with a kick-off showcase by our own Chinese Drums, who astonished the crowd with three vigorous performances. Entitled Chrysalis, the drummers played three distinct drumming styles and brought the mood of the crowd to a high.

Another highlight included the regular Exam Welfare Packs giveaway, which were jam-packed with items like food vouchers and snacks from generous sponsors. Donning their CAC shirts, members came together with their friends and lined up early to collect their free goodie bags. On top of that, various craft stations were also prepared for members to unleash their inner artist and design their own shrink charms and tote bags.

To make it even better, a mystery Easter Egg hunt was announced in the week leading up to CAC Day. With clues left every day on the official NTU CAC Instagram page eluding to the location of the eggs –one gold, one silver– members combed the campus thoroughly, even heading out on midnight group hunts. At the end of the week, two lucky winners walked away with a pair of Paul Hewitt watches and a brand new Polaroid Camera!

On this day at Canopy K, the atmosphere was joyous and spirited, with friends reuniting in excitement and an air of positivity and support for one another. CAC Day provided the perfect platform for CAC members to come together and reminisce the milestones they have achieved over the past academic year.

Next to Bonding Day and Member’s Night, CAC Day stands for one of the many times we take time to celebrate our achievements, our friendships and our experiences together as a club — through the ups and downs, new friendships and old friends, it is all about keeping the spirit alive for generations to come.

It is in this spirit of celebration –of CAC and the golden jubilee edition of ArtJam– that we decided to do something slightly different this time: introducing our support clubs, Concert Engineers (CE) and Emcee Club!

The backbone of any event, concert engineers and emcees are essential in any event. Yet, it is this side of CAC that often gets overshadowed as we focus on the performers. We spoke to some members from these two clubs to find out more about what they do!

Describe your role (as a concert engineer/emcee) in 3 words!

Joseph (CE): Saikang warrior, backstage warrior. Just as it reads, we do the tough work.

Zi Xuan (CE): Behind the scenes. Essentially, we run the show off-stage!

Abigail (Emcee): Energetic, exciting and effort. As an emcee, you need to be energetic to allow your audience to get into the mood appropriate for your event. There is also never a day on stage where it’s not exciting, particularly when you have audience interaction weaved into the programme. Being able to emcee is also tougher than most think, as it isn’t just about reading a script, but putting on a show and entertaining your audience.

How did you come into this role? Was it very hard picking up the relevant skills?

Hanna (CE): I saw some publicity flyers at the booth during the welcome orientation when I first entered the school. It looked interesting, so I decided to give it a try!

Jonathon (CE): I was intrigued by the word ‘engineer’ in our title when I first heard it. Curiosity then turned into interest and passion for sound!

Abigail (Emcee): Personally, I’ve been hosting events since Secondary School. I loved it and I never stopped looking for opportunities to host even during my poly days. Joining the NTU CAC Emcee Club in Year 1 really boosted my career in the realm of hosting and blessed me with endless opportunities.

Gina (CE):  Everything is tough when we first started out, but picking up both the hard and soft skills is not that difficult after supporting a couple of events!

What’s the best thing that encourages you to continue in this work?

Abigail (Emcee): Definitely meeting people who tell me that they’ve enjoyed the event, that I’ve done an amazing job plus when they compliment that I have a wonderful voice. I also enjoy the adrenaline I get when I’m on stage!

Maria (CE): Besides the interest and passion that spurs us to continue our craft, it is also the friendships and bonds built with fellow members and satisfaction felt at the end of a tiring but successful event that keeps me going.

What has been the most memorable event you have crewed/emceed for? Was there an event that was very stressful?

Abigail (Emcee): Definitely Singapore Sustainability Symposium 2018 for memorable event! It was a golden opportunity, with the GOH being Mr Heng Swee Keat, Minister for Finance. It was the first time I witnessed so many security officers running around a man.

The Launch of the NTU-LTA-Volvo Autonomous Bus with Swedish Ambassador to Singapore, His Excellency, Niclas Kvarnström was one of the more stressful one as I was only hired for the event in the late afternoon the day before the event! Nonetheless, it was a smooth sailing event!

What are some of the difficulties you faced while working at events?

Abigail (Emcee): I think one of the difficulties is when the clients don’t really know what they want from us or that they’re doubtful of our skills as an emcee. Another difficulty will definitely be trying to get audiences to interact with us! People are so scared of the microphone, sometimes they even act as though it’s a snake trying to bite them

ZI Xuan (CE): Working with people of different opinions is always hard, anywhere you go. For events, resolving technical difficulties within time constraints is another huge challenge as that can be very stress-inducing!

Lastly, what are some things we might not know but you wish to say about being an emcee/concert engineer?

Kai Siang (CE): We stand by the motto that  “you don’t need to be a professional to provide professional service.”  We are always proud and eager to give our best and run the show well!