Skip to content
Loading...
Latest articles
Searching for a National Identity through SGIFF’s Singapore Panorama Short Films
To Laugh Or To Cry? SGIFF’s Opening Film ‘Assault’
What’s it like to run a film festival?
For My Highness – Sex, Drugs & A Mother’s Prayer: Interview with director Adeeb Fazah and playwright Shaleihin Pi’ee
‘The Almighty Sometimes’: Searching for Identity Amidst the Chaos of Mental Illness
CAC EventsMusic 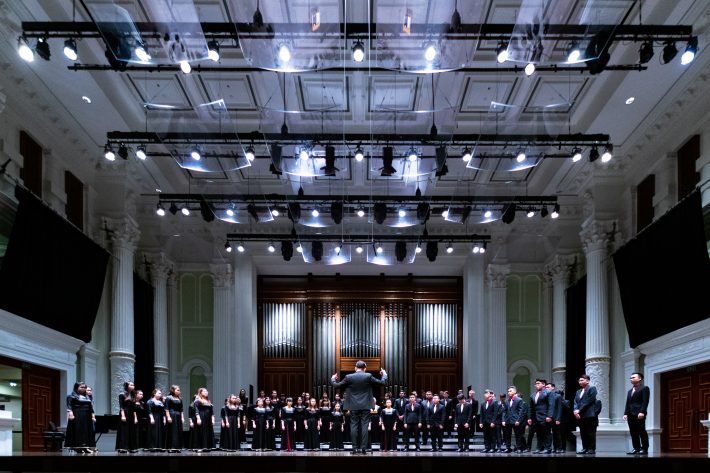 The NTU CAC Choir is back with the 24th edition of their annual concert, Cantemus. Held at Victoria Concert Hall, the concert drew a large crowd which filled out both levels of the venue. The theme of this year’s concert was Luctor Et Emergo — Latin for “I struggle and I emerge”. There could not have been a better theme to encapsulate the spirit of the songs in the concert lineup.

The audience was taken on a roller-coaster ride of emotions, as many of the songs performed depicted the feelings of pain and triumph. The choir performed a stirring rendition of “Bubuy Bulan”, an Indonesian folk song about the feelings of longing when separated from a loved one. There was also “Entreat Me Not To Leave You”, which narrated a story from the Bible, in which a widow makes a promise to follow her mother-in-law and makes the journey back to a place that she knows will reject her for her religious beliefs. “Perseus”; narrating the tale of the eponymous Greek hero, truly captured the theme of struggle and triumph.

Spanning from traditional folk songs to pop songs, the choir demonstrated their talent by performing a wide range of genres in their repertoire. In particular, Michael Buble’s hit song, “Home”, clearly struck a chord with the crowd as many members of the audience could be heard singing along to that tune. Another performance that stood out was Latvian folk song, “Es Gulu Gulu”. In this song, the choir’s vocals were soft and soothing. The choir also impressed the crowd when they used their bodies and voices to mimic natural sounds, such as bubbles and water. With the extensive geographical origins of the songs performed, the choir had to perform their songs in various languages. The effort the club had invested into their practice sessions clearly showed as they executed songs of different languages effortlessly — from English to Japanese, to Latin and even Sundanese!

In a show of the club’s camaraderie, the alumni choir came together to put up a stunning performance. Performing the pieces “Ubi Caritas”, a church hymn, and “Tsunagari”, the alumni team showed poise and confidence befitting of experienced performers. The concert ended off on a triumphant note with crowd-favourite “This Is Me” from the hit movie-musical, The Greatest Showman. Even if the audience did not understand the lyrics from the previous songs, this finale truly drove home the message. With a rousing chorus, this song invited us to embrace our flaws and broken parts and to go out into the world, proud of who we are.

Not to mention, there was a surprise encore, as the choir belted out their rendition of “The Circle of Life”, causing the crowd at Victoria Concert Hall to burst out into cheers. This was truly a fitting conclusion to “Luctor Et Emergo”. From a Latvian folk song lamenting the departure of a lover to a Japanese song written after a tsunami and earthquake devastated the Tohoku area, the concert presented a spectacle that allowed the audience to bear witness to the beauty of choral music as it told the story of survival.