Skip to content
Loading...
Latest articles
USPresents: Two Wandering Spirits, Three Government Officers (and other assorted ghosts)
I Am What I Am – The Latest Animation Milestone via Hyper-Realistic Lion Dances
Harvest Moon – A Cafe Pop Playlist by Where Are The Fruits
Characteristics of Modern Living Exhibit A
Dances with Mushrooms
ArtCAC EventsDanceMusic 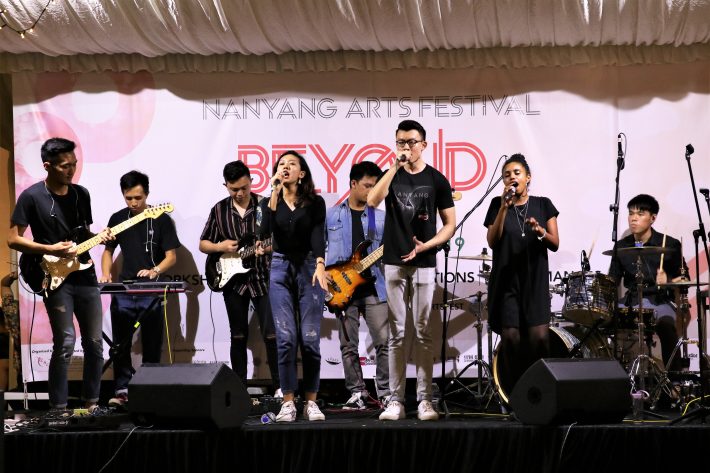 Nanyang Arts Festival (NAF) is a student-driven, school-wide annual celebration of the vibrant arts scene in NTU. Themed Beyond this year, the NAF committee sought to push students beyond themselves, beyond surface and beyond just a festival. Besides curated performances, exhibitions and workshops, the festival, which took place from 17 February to 7 April, was complete with several featured events for students to express themselves through hands-on activities. If you missed the festival this year, fret not as we bring you the highlights of the festival!

The annual Nanyang Arts Festival (NAF) 2019 kicked off its featured events with a carnival at Canopy Stage — packed with activities and free performances, Art-Verse is dedicated to celebrating creativity and the art scene in NTU.

Aside from free churros and a photo booth, visitors enjoyed the numerous arts and crafts booths, from a handmade Plinko board to a DIY ink-stamping station where visitors could get creative and design postcards using the array of stamp designs available. There were also hourly performances by CAC’s very own performing arts clubs, including Harmonix and Chinese Drums, which added a lively atmosphere to the festival. With music playing in the background and chatter filling the air, Canopy Stage had transformed into a bustling arts festival right in the heart of NTU.

As visitors left with their photos and self-made trinkets and the festival came to a close; it was clear the NAF was off to a great start, setting the tone for the rest of the activities to come.

Another one of the featured events organized by NAF, Immersion Night aimed to expose students to the various forms of art in NTU. With Canopy Stage decked in fairy lights, students gathered for a whimsical night, unwinding after a tiring school week. Regardless of which faculty you came from, the variety of activities were sure to be of interest to you.

For those eager about getting hands-on and creative, workshop booths such as letter sign drawing, cap painting, spray painting and painting with watercolors were some of the highlights of the night. Every participant was focused on their craft and vibrant in their use of colors, engaging their creativity while picking up a new skill.

Besides workshops, the evening was also lined up with a variety of performances, ranging from classical to pop. There were repertoires by NTU CAC Piano Ensemble and String Ensemble, as well as renditions of ABBA’ s “Dancing Queen” and Hebe Tien’s《小幸運》(A Little Happiness) by NIE Pop Band. However, the main feature of the night was definitely the much-awaited Wearable Tech Fashion Show, which showcased the design projects of the Art, Design and Media (ADM) students from the course — DR2014 Wearable Tech, Fashion and Design. Just like the moments before any fashion show, the audience sat waiting with a buzz of anticipated chatter filling the air. As soon as the music started playing, everyone’s attention snapped to the stage as the first model made her appearance. Showcasing
the talents of the ADM students and their innovative interpretations of wearable technology, each and every outfit stunned the crowd at Canopy Stage, with passers-by stopping to snap the moment for their social media. Some notable outfits include a mermaid white dress infused with LED lights and a glittery gold one-piece that covered the model from head (even face!) to toe. Nonetheless, here at ArtJam, our favorite outfits were definitely the ones modeled by Amira, Rachel and Ying Quan from our very own publications team!

Whether it was arts and crafts, performances or fashion, NAF’s Immersion Night was certainly an evening worth remembering.

For the festival’s grand finale, NAF decided to bring NTU’s very own talents out into town with a closing ceremony at the lawn of CHIJMES. Despite a heavy downpour earlier, chill and relaxed vibes were aplenty as fairy lights adorned the lawn. Visitors got to try their hand at Silkscreen Printing at a booth set up by the NIE’s Friends of the Visual and Performing Arts programme and take home a tote bag that they made. Audience members could also get a henna tattoo at a booth set up by The Henna Canvas. There were also free goodie bags and chips from F.E.A.S.T that came in unusual, local flavours for everyone!

Of course, no arts festival is complete without its performing acts. The evening of performances kicked off at 7pm and the crowd was treated to band performances from the Hall 13 Jamband, Hall 16 Jamband and NTU CAC Jazz & Blues. We also got to see performances from NTU CAC’s MJ Hip Hop and Breakers! To end off the night (and the entire festival), dancer Kevin Hammy Lim and his K-Pop dance crew took the stage, stunning the crowd with a rousing finish.

No doubt, this year’s NAF was bigger and better than ever before, spanning a grand total of seven weeks. NTU students were treated to a wide variety of performances, including concerts held by our Member Clubs, and a whole range of free workshops from a cappella to flower arrangement. Taking the lead from the name of one of NAF’s featured events, here’s hoping that by immersing NTU student population in the visual and performing arts, these artforms can eventually find a space for themselves in the NTU eco-system and continue to thrive.