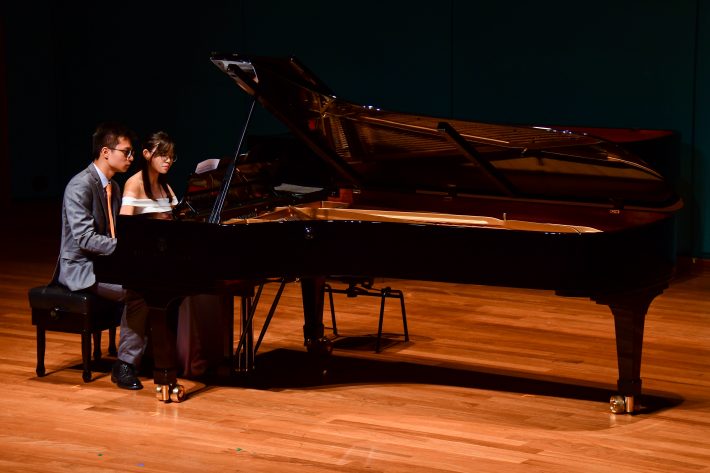 On 5 March 2019, NTU CAC’s Piano Ensemble staged the fifteenth installment of their annual concert Eleganza. This year’s Eleganza was subtitled Fantasia, conjuring images of wild, roiling backdrops and out-of-this-world phenomena. I later found out, however, that “fantasia” is actually a real word… but its meaning is somewhat different from my grand imaginings.

“Fantasia” is actually the musical term for compositions rooted in improvisation, and pieces in this class usually break the usual trends of form and structure. Looking back on Eleganza, both interpretations of the word “fantasia” seem to apply; the Ensemble pulled from a wide range of styles and genres throughout the night and never settled into a monotonous progression of songs. Within this huge variety, each song seemed specifically selected to transport the listener into one of many different worlds. This dynamism and sense of displacement are ultimately what made “Fantasia” a thoroughly engaging show.

Right off the bat, the Tchaikovsky’s iconic “Marche” (“March”) and “Danse de la Fée-Dragée” (“Dance of the Sugar Plum Fairy”) drew us in with their familiar, graceful melodies. It didn’t take long, however, for things to take a sharp left turn, as the ensemble tackled the endlessly catchy “Zenzenzense” (前前前世, “Past Past Past Life”), lifted from the phenomenal hit movie Your Name (君の名は Kimi no Na wa). RADWIMPS’ original single is a high-octane pop-rock race with unexpectedly sweet lyrical undertones, and the piano-only arrangement we heard here really drew the sweetness out to the forefront. In fact, something about RADWIMPS’ Your Name theme songs seem to lend them to being transformed and stripped back into delicate piano pieces, as another track off the movie’s OST, the wistful “Yume Tōrō” (夢灯籠, “Dream Lantern”), was covered later on.

These anime-inspired moments lent a hand to giving the show an air of liveliness and unpredictability; it was interesting to hear them mixed in with many “traditional” classical pieces and more modern, Western hits. Indeed, the jump from RADWIMPS’ “Yume Tōrō” to Tchaikovsky’s “The Sleeping Beauty” was immediately followed up by a medley from the massive musical The Greatest Showman. In just three movements, the ensemble spanned 130 years, thousands of kilometers, and three vastly different sources, all while sticking to tunes that were well-known, easily accessible, and instantly recognisable. This knack for sequencing was probably Eleganza’s greatest strength, keeping the momentum high without sacrificing the musicianship on display.

After a short intermission, we were treated to more of the same — “same” here meaning more unexpected twists and distinct shifts in style between pieces. Another anime OST cover, another classical piece by Mozart, all combining for an eclectic mix that culminated in “Madness to Redemption”, an engaging suite of five songs tracing one mind’s struggle with and victory over madness. This proved to be the crowning jewel in an already glittering show, as it was enthralling and had the audience rapt throughout the five distinct but seamless movements. “Madness to Redemption” proved to be a fitting end to Eleganza 2019: Fantasia, ultimately leaving me truly anticipating the next one. Till next year!