Skip to content
Loading...
Latest articles
USPresents: Two Wandering Spirits, Three Government Officers (and other assorted ghosts)
I Am What I Am – The Latest Animation Milestone via Hyper-Realistic Lion Dances
Harvest Moon – A Cafe Pop Playlist by Where Are The Fruits
Characteristics of Modern Living Exhibit A
Dances with Mushrooms
InterviewsMusic 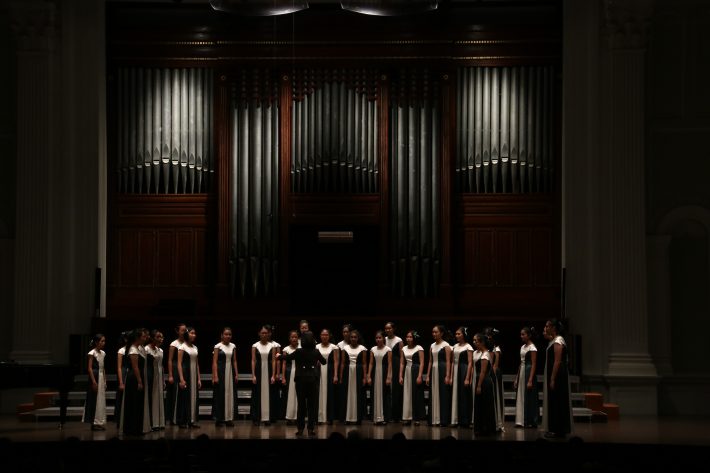 The Singapore Lyric Opera Children’s Choir (SLOCC) is back with a new concert, themed How Far I’ll Go. Named after the hit song from the Disney movie, Moana, this concert features a lineup of songs that are daring and inspiring, pushing the common theme of exploration and ambition.

This year, SLOCC is also collaborating with choirs from Raffles Girls’ Primary School and Saint Margaret’s Secondary School. ArtJam was lucky enough to get an interview with SLOCC’s conductor, Rose Loh.

With your various experiences in conducting and singing, what inspired you to want to work with children?

The beauty a child’s voice can produce when trained well, and a child’s innate musicality that can be expressed when exposed to different repertoire that explores song, drama and dance. A healthy child’s voice should sound bright, light and free, resonating most beautifully in the head tone.

How was the experience like working with children for this concert? What are some of your favourite moments, and were there any difficulties?

Mostly fun; especially when their eyes sparkle when harmonies lock-in musically, during their art song singing performance or when they sing and groove rhythmically into their song movements or even when they emote expressively as required by the songs. Blending voices from ages 6-14, teaching new members how to sing and dance the box step, and sometimes how to overcome themselves, were some difficulties.

How do you think the children feel about performing?

Most children enjoy the performing process like a new adventure. For starters, some new members will find memorizing music, coordinating their dance moves all overwhelming. But just like acquiring any new skill, all it takes is patience, practice, self-awareness and managing their bundle of nerves and emotions that can sprout from excitement, fear, and so on, all into a deep breath. It helps that new members are surrounded by their seniors who can help guide them along.

What was the inspiration behind the theme of “How Far I’ll Go“?

As the song “How Far I’ll Go” is taken from the Disney’s 2016 animation, I see this song as a gateway for children into the world of operatic art songs that will require more vocal athleticism. In my time with SLOCC, music selections having stronger narratives found in the animations and music theatre, tend to connect better with children of all ages. Here in SLOCC, our children’s ages range from 6 to 14.

Like Disney’s 2016 animation, Moana sings about how far she will go to save her polynesian island home from destruction. In this upcoming May 25th concert named “How Far I’ll Go”, like the song title, the concert will present a myriad of songs celebrating going beyond the impossible distance. From Annie who imagines longingly on what her parents could be like in “Maybe”, there is nature casting a “Spell to Bring Lost Creatures Home” and how death can be transformed into something new, strange and magical in John Ireland’s “Full Fathom Five”.

What would you say is the thing the audience can look forward to and take away from this performance?

Audience can look forward to a song sung and danced to the New Orleans’ Jazz style, entitled “Almost There”, which is taken from the Princess and the Frog Disney’s 2009 animation, composed by Randy Newman. Audience can take away the message of how far a child should aim for with their musical or life journeys.

True to Ms Loh’s words, the choir’s rendition of Almost There was one of the key highlights of the show. In this song, Tiana talks about putting in the effort and chasing her dreams, driving home the show’s theme of How Far I’ll Go. Other songs worth mentioning are “Everybody Rejoice”, from the musical The Wiz and Can You Hear Me?, a song about a child talking to a deaf person. To accompany their performance of “Can You Hear Me?”, the singers also signed part of the lyrics, providing interesting visuals to accompany their vocals. They also performed the Chinese children’s song, “Little Frogs”, which provided for a nice moment of nostalgia.

This author’s personal favourite out of the entire lineup of songs was “Hoshini Negai Wo”, a Japanese cover of the hit Disney song, “When You Wish Upon A Star”. The lyrics are gentle and soft, even when sung in a different language and there is this sense of hope in these young voices.

The songs from movies and musicals were familiar but had a new spin put on them by these fresh voices. Overall, this performance was incredible, especially considering the age of these young singers — one hopes that these kids will continue to hone their craft and become the best singers that they can be.