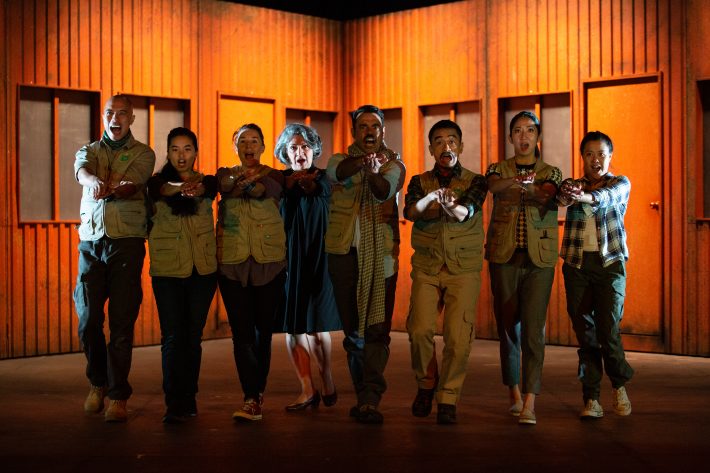 Singapore’s most extensive arts festival is back! With both local and foreign pieces across the mediums of theatre, dance, music, film and the visual arts, the Singapore International Festival of the Arts 2019 ran from 16 May to 2 June 2019. Two pages clearly isn’t enough to cover all of the exciting things that happened at SIFA, so we’ll be focusing on three of the most talked-about theatre pieces from the festival.

Stylish, surprising and unique are just some of the words that describe UK-based company, Curious Directive’s addition to the festival, Frogman. This production sold out fairly fast, catching the attention of many because of its combination of Virtual Reality (VR) and real-life theatre.

In the summer of 1995, Meera’s best friend, Ashley, goes missing and is declared dead. Over twenty years later, the police reopens the cold case and Meera is forced to confront some dark truths from her past when her father is arrested as the prime suspect.

Performed in a tightly-knit, intimate theatrical setting, the most intriguing element about this production is undoubtedly its use of virtual reality headsets, pivoting between scenes shot in 360 degree VR and live-action sequences. The live-action sequences show the present-day interrogations while the VR clips show flashbacks and present police evidence from the original case. This medium suits the storyline perfectly, allowing for seamless transitions as scenes jump back and forth in time.

With an audience size of less than forty people, everyone gets a close, intense look at the action on stage while being treated to gorgeous (360-degree!) underwater scenes. Novelty factor aside, the characterisation and narrative in this production stands well on its own, with a fantastic cast that can convey the intense emotions and heart-wrenching storyline that pulls the various elements together.

Displaced Persons’ Welcome Dinner is about the struggles of a team of humanitarian aid workers trying to keep a refugee camp going. Surprisingly, there is no feature of the eponymous dinner or the planning of it. However, it does deal with a myriad of issues surrounding the aid workers — one lady begins to regret this career as she realises that she has no family of her own, while another struggles to hang on to his own family back home. A girl finds herself dealing with guilt in the light of her colleague’s death at the hands of brutal militants and another man finds himself confronted with a difficult decision — accept a bribe and get more resources in exchange for giving smugglers access to the camp, or turning it down and watch more innocent people die? Hard dilemmas are aplenty in the plot but disaster strikes when the camp’s chief is kidnapped.

The plot itself is interesting, and the themes and issues presented are indeed thought-provoking. However, there was a little too much exposition and too little action on-stage, especially during scenes when the characters are discussing complicated issues. The performances from the actors were fairly strong too. Notable scenes from the play include one when the camp’s security level is put on high alert, and the workers are given some time to call their families at home. The heart-wrenching pleas and prayers were very intense and felt very real.

Overall, while it had a little too much talking and came off slightly confusing at the beginning, the topics and themes discussed in Displaced Persons’ Welcome Dinner are so important in our modern society and the trials and tribulations faced by the characters will hit very close to one’s heart.

A Dream Under the Southern Bough: Reverie (南柯一梦之如梦)

Everyone’s familiar with the works of William Shakespeare and his plays. Although written hundreds of years ago, his works live on, even more so when audiences swarm Fort Canning Park whenever Shakespeare in the Park rolls into town. This year, SIFA is serving up a Mandarin equivalent, staging a modernised adaptation with the exact words from the Ming Dynasty play, Record of the Southern Bough, written by Tang Xianzu in the late 16th century. Presented by Singapore’s very own Toy Factory Productions, A Dream Under the Southern Bough is an extremely ambitious project — almost like The Avengers of the Singaporean Chinese theatre scene. Beginning with The Beginning, presented at SIFA 2018, Reverie is the second instalment of the three-part long production, culminating in Existence, to be presented at SIFA 2020.

A Dream Under the Southern Bough follows our main character, Chun Yu Fen, depicted in this production rocking a denim jacket and chilling at video game arcades, as he takes a nap and descends into the mythical Ant Kingdom. It was interesting to see how they adapted a period piece for a modern context. The stage design was interesting, with some scenes from the Ant Kingdom being performed from behind screens. The set piece for the throne room of the Ant Kingdom was unusual — instead of going for the usual vision of opulence associated with royalty, they went with a minimalist white and hints of silver. However, this worked out really well, complementing the costumes of the Ants. Another highlight of the stage production was the costumes, especially those worn by the characters from the Ant Kingdom. Each character had their own unique set of white robes, decked out with gold accents. The pure-white cleanliness of the Ant Kingdom also provided a pleasant contrast to the dark, purple dimness of the bar and the gaudy warm tones of the temple.

Among the characters, the physical performance of the Ants were well done, with sharp, almost inhuman movements. However, even if one’s Chinese is fairly strong, you might struggle a little with the period correct dialogue at first — the same way a native English speaker has to get used to Shakespeare. Thankfully, there are subtitles on the screen to guide the audiences.

While we’ll have to wait for SIFA 2020 to see how this fairytale ends, this production is fairly interesting on its own.