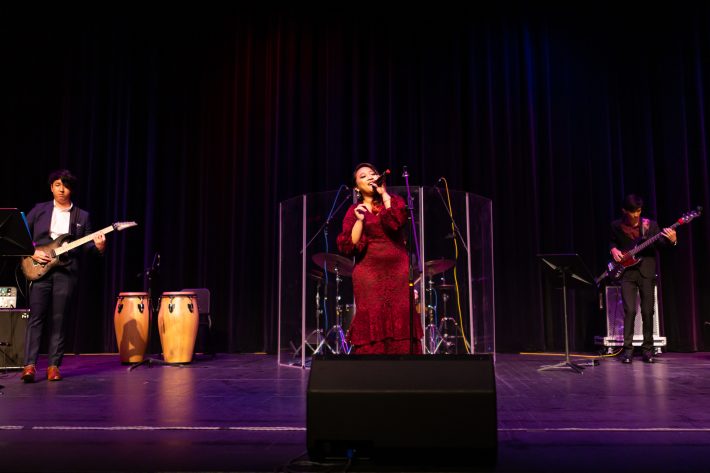 The term “jazz” conjures many images in the mind depending on who hears it — from the swanky air of an old-fashioned jazz bar to the sweaty, tense claustrophobia of the Shaffer Conservatory in the hit film Whiplash. A bit of digging, however, reveals that the word “jazz” has its roots in an old American expression that carried tones of energy, unpredictability, and life, and NTU CAC’s very own Jazz and Blues club well embodied this spirit in the sixth edition of their annual Hourglass showcase, subtitled “Something Nice, Something _____”.

It is worth noting, before we begin, that Jazz and Blues actually comprises three bands, amusingly named after the days of the week on which they practice — Tuesday, Wednesday, or Thursday. This multiplicity allows the club as whole to explore a wide variety of styles and genres, as the three bands ran the gamut from jazz standards to pop covers and movie soundtracks.

As we settled into NUS’ University Cultural Centre with no idea what to expect, the Tuesday band kicked things off with a warm and soulful rendition of  the Sinatra standard “I’ve Got the World on a String”. With that undoubtedly strong opener, the club continued to build in the next segment, as the band unleashed a gripping flute solo followed by some of the hardest flexing we’ve ever heard from a bassist. From this point on, it was marvelous to witness how, even with three bands and countless solos by individual members, the club managed to build a seamless show from start to end. It was, as they say, a whole mood.

One key thred holding this brilliant revolving door of talent together was the work of the two emcees who guided us through the show, who were as much of a spectacle as the actual bands playing. At every turn, the hosts banished any dead space between songs and injected humour, spontaneity, and life in spades. Case in point: at one point, as the emcee was in the midst of introducing the next item, a rogue drummer accidentally started the performance, a “misstep” that turned into a carefully synchronised re-enactment of the famous climax of Whiplash. By integrating these transitions into the show at large, they ensured that there was never a moment where the momentum flagged, and we were thoroughly entertained throughout.

When presented with such consistent excellence, it’s always hard to single out any one moment as a “highlight”, but the cover of the massive hit “Don’t Stop the Music” at around the midway point stood out as one that was really unexpected. Rihanna’s original single, with its insistent beat and unrelenting tempo, hits like a truck, but here it was pulled apart and put back together as a syrupy, soulful jazz masterpiece. This transformation was nothing short of flawless, and was just another reminder of the kind of talent that Jazz and Blues has up their sleeves. The rhythm section led the gear shift on the cover, eschewing muscular grooves for a slow-burning pillow that floated up and carried the lead singer — not that she needed any carrying, as she expertly deconstructed Rihanna’s club-friendly exhortations and repurposed them as something else entirely.

Jazz and Blues moved from strength to strength, and while “Don’t Stop The Music” was the most unexpected performance of the evening, it was by no means the only good one. Other highlights of included a fresh and inviting interpretation of Frank Sinatra’s “New York, New York”, a perfectly placed and deliciously retro synth solo, and a cover of “So This Is Love” from Cinderella as a lovely duet that had the audience in stitches. This Disney throwback was our personal favourite performance of the night, and in the hands of the bands charismatic duet partners, it was remodeled as  something awkward, bashful, sweet, and unbelievably cheesy. This cute take on an old love song was thoroughly entertaining and, if we’re being real, is probably closer to what love is really like anyway.

We could go on and on about everything else that went down that evening, but we will resist and instead conclude this piece by saying this: was the musicianship and technical mastery on display at “Something Nice, Something _____” the best we’d ever seen? Yes. But, arguably more importantly, Jazz and Blues had put on a show that was not only “good”, but also straight-up fun and was 100% a great way to spend an evening. We can’t recommend their next show enough.