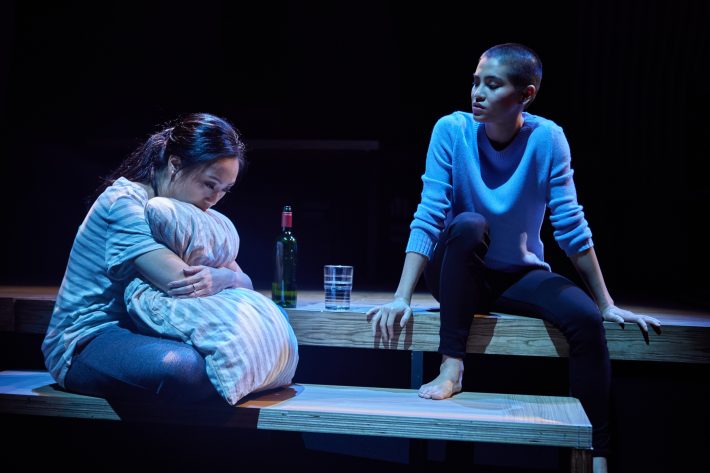 What happens when a moral line is crossed?

More importantly, what happens if your line is different from my line?

Is an apology ever enough? And what should we do moving forward?

These are some of the questions that struck me after watching Pangdemonium!’s This is What Happens to Pretty Girls.

In light of the seismic reverberation of the #MeToo movement across the globe, This is What Happens to Pretty Girls explores the ugly truths, complexities, and nuances of issues concerning consent, sexual misconduct at the workplace, victim-blaming, and toxic masculinity. Written by Ken Kwek and directed by Tracie Pang, the play is inspired by over a hundred testimonies of both survivors and perpetrators, and brings forth a myriad of challenging conversations that are much needed today.

Setting the tone by opening with Robin Thicke’s hit song Blurred Lines, the play follows the trajectory of eight characters: Amanda (Oon Shu An), a literature professor who finds herself in a flirtatious situation with an undergrad named Sean (Thomas Pang); Natasha (Tess Pang), a new employee at a promising tech firm who experiences an unexpected interaction with her superior Ray (Jamil Schulze); Lester (Adrian Pang), a machismo CEO whose encounter with his old schoolmate Charles (Paul Courtenay Hyu) opens up a traumatic past; Maureen (Pam Oei), a HR director as well as Becky (Serene Chen), an acclaimed feminist academic. As their lives intertwine through the play, I was particularly impressed by how the layers of each character were cleverly unpacked by the team. Each moment contributed not only to the emotional intensity of the play, but also served to highlight the difficulty of passing a definite judgment on the issues at hand.

While each “subplot” is provocative in its own right, I found Lester’s and Charles’s storyline to be the most thought-provoking. This is because the story debunks the stereotypes that sexual harassment and assault are exclusive to women, and at the same time addresses pertinent considerations in the era of #MeToo — what defines a masculine man? How backdated should allegations be to hold perpetrators accountable?

The set design also provided an interesting commentary on the state of our society. Made to look like the breast, buttocks and female genitalia, it was a subtle reminder that a woman’s body is subjected to objectification whether we like it or not. As a young woman myself, it was eye-opening to find myself being uncomfortable with the sight at first, only to realize later that I had become accustomed to the set as it fades into the background as the play unfolds.

Regardless of your concluding thoughts on #MeToo, the play leaves us with a gut wringing reality that the victims, perpetrators and their loved ones will continue to face the emotional toll of the assault. Entertaining yet provocative, the play will definitely leave you emotional, at the edge of your seat, and most importantly, thinking.