Skip to content
Loading...
Latest articles
USPresents: Two Wandering Spirits, Three Government Officers (and other assorted ghosts)
I Am What I Am – The Latest Animation Milestone via Hyper-Realistic Lion Dances
Harvest Moon – A Cafe Pop Playlist by Where Are The Fruits
Characteristics of Modern Living Exhibit A
Dances with Mushrooms
Special FeaturesTheatre 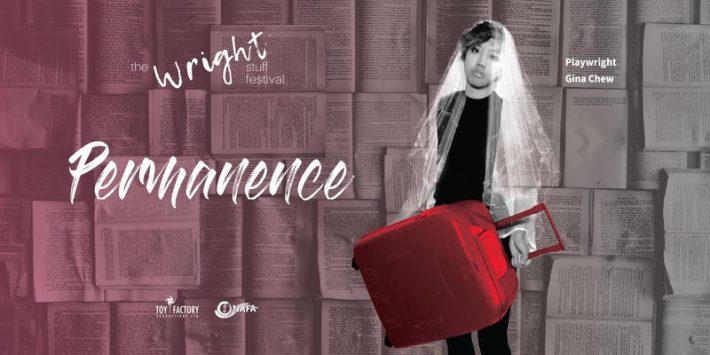 Toy Factory Productions is back at it again with The Wright Stuff Festival. Opening the 2019 iteration of the festival is a rerun of Permanence, a polished version of the hit play from its 2017 edition. This is a piece written by emerging playwright, Gina Chew, during her days as an undergraduate studying English Literature. It was directed by Mitchell Fang.

Permanence is an interesting piece with a lot to digest along with it. In this, we see factions of people and lifestyles that are not commonly seen in television, theatre or any form of media at all. It also raises many thought-provoking questions. We’re used to seeing shows deal with issues like stress in school, needing more money and being part of the competitive rat race driven by our kiasu Singaporean mindsets, but Permanence invites us to cast all of that aside and wonder — what if we actually don’t want to take part in the rat race at all?

Our heroine Blanche (played by Chanel Ariel Chan and Grace Lee-Khoo) has an interesting perspective. While the rest of us are thinking about how to achieve that picture-perfect Singaporean dream of a BTO flat and children, Blanche is desperate to get out of that socially-prescribed cycle — terrified of having children, terrified of being tied down to one man forever and terrified that her life will turn out so painfully… normal?

Along the way, Blanche makes questionable decisions. Without giving too much away, we see her leaving a man who makes her perfectly happy without an explanation, only for her to sleep with that same man at her wedding (to another man, no less!). Blanche is a difficult person to deal with most of the time, unpredictable, irresponsible and very passive-aggressive. The audience will sometimes find themselves empathising with the frustrations of Blanche’s romantic interests, Chris (Jamil Schulze) and Nathan (Terrance Tan Jun Yan).

It’s also interesting to note the playwright’s choice of main characters: Blanche and Chris are pictured as deadbeats – Chris is a bartender, Blanche drops out of school, both rent a room that is furnished with all of one bed, and all they ever seem to do is to go to the clubs. Even Nathan, Blanche’s Prince Charming, turns out to have some pretty oddly specific goals — and will stop at nothing to achieve them. In truth, the characters in Permanence are by no means likeable. To put it harshly, Blanche, Chris and Nathan’s actions reek of self-centredness, irresponsibility, disloyalty, and even abusiveness. They aren’t the classic pleasant protagonists whom we would befriend in real life. If anything, if we ever met one of the Blanches or Nathans of our world, the best thing we could do for ourselves would be to run.

Even so, Chew’s morally flawed character Blanche is poignantly relatable in her fears and internal struggle, if not in her misguided actions. Permanence deals with the decisions of someone who has difficulty accepting that she has to adhere to the life society has prescribed to her, and everyone else. What if we refuse to? These are concerns that should not be trivialised.

The director manages to keep the show interesting and engaging, especially during the scenes where a young Blanche speaks to an older Blanche, both Blanches discussing their hopes and fears.

The theatre space itself makes the entire show a very intimate experience. It is set within a black box. surrounded by three sections of seats with only four actors. The set design is well-done, an open space with various pieces of furniture to help us situate the narrative — the bar that Chris works at, the tiny mattress that Chris and Blanche share and eventually, Nathan and Blanche’s dream home. Altogether, they serve to juxtapose the present and the past, the exciting transience and banal Permanence.

(While Permanence has ended its run, The Wright Stuff Festival runs until 3rd November, tickets can be purchased here for their next three shows, Ashes, Ashes, Random Access Memory and The Puppet King (in Mandarin))