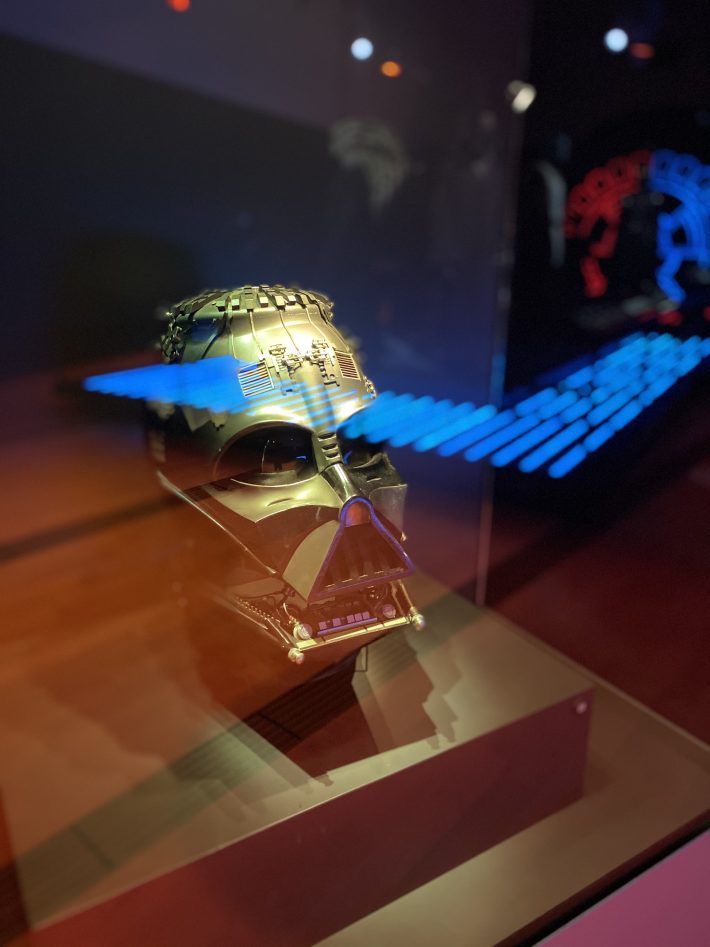 In a galaxy far, far away, on a planet of sand, lies a hut on the fringes of civilisation. In the small alcove of this adobe, a space wizard pensively stirs a pot of tea. As he rests for a moment, a shiny, silver-blue astromech droid chirps to life, turning on its holo-projector with a start. It beams out a flickering hologram of a princess barely visible in the glare of the twin suns above. Her message?

And offering just a different sense of hope in these confusing times, is the ArtScience Museum’s latest exhibition, Star Wars Identities. With a generous contribution of a better part of their prop warehouses, Lucasfilm, creators of the Star Wars Universe, has brought artifacts from its storied past to Singapore’s shores for the first time in this latest feature. Ranging from early concept art, storyboards and costumes, each part of the Star Wars Universe has been given a generous feature, even up to the most recent slate of films from 2015-2019.

This is featured alongside Identities, an interactive feature which allows one to create and customise a character in the Star Wars universe (disclaimer: great lineages not included).

Scattered through numerous showcases of memorabilia, are RFID stations which allow each goer to record choices they made at these stations on their personal wristband.

These offered visitors a plethora of choice as to their race, even up to their moral alignment in the Force.

When it came to race, one was given up to 9 choices, from the reptilian Trandoshan hailing from the lush hills of Trandosha, the fan-favorite grizzled native of Kashyyyk, the Wookie and even a form a bit closer to home, the Human. Many goggled for a moment, stunned somewhat for the multitude of choices in creating their own character in the Star Wars Universe, wondering which one to pick. As a life-long fan of the entire mythos, however, I was raring to run off to see the artifacts, so I went with my heart and chose the decidedly heroic race of the Bith.

Bith: a hairless humanoid species with bulging glassy eyes some would recall, comprising a quartet playing in Chalmun’s Spaceport Cantina at the start of 1977’s A New Hope, as Luke and Obi-Wan search for someone willing to take them to Alderaan.

Passing through this initial stage, the exhibit took a distinctive approach by beginning with the humble roots of side characters that thrilled audiences worldwide, from the plucky Jar Jar Binks, to the battle-worn anti-hero, Boba Fett. Numerous character sketches featured the early starting points of these characters, demonstrating the vast lengths that Lucasfilm production designers went to in creating a universe full of life and uniqueness. 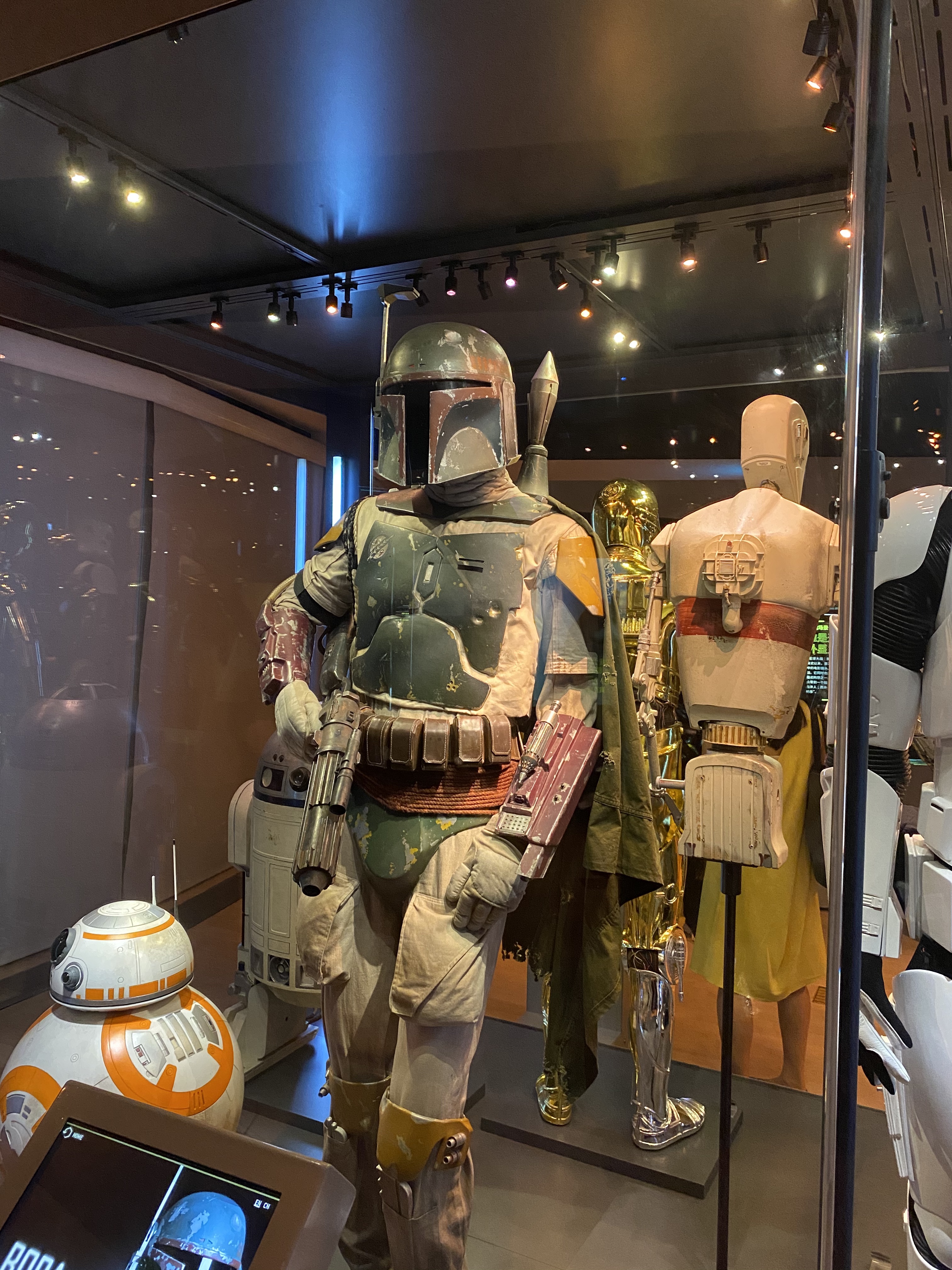 A personal favorite of mine was the original costume of bounty hunter Boba Fett, in 1983’s Return of the Jedi, with battle-damaged plate armor over the fascia of his tunic, and Mandalorian helmet featuring a distinctive T-shaped visor with mounted antenna. One could actually see deep down in the pockmarks of the suit of armor, the designers had captured Fett’s history perfectly as a hardened veteran of many a collected bounty, in the fourragere over his right shoulder, and pock-marked green cape. It struck me that just centimetres away was the very armor that I saw shooting across the sandy wastes of the Sarlacc Sea, dodging blaster fire, aiming salvos of lasers at the heroic space wizard with green lightsaber. This same cape billowed in the glare of the twin suns of Tatooine, darting away each time, just centimetres away from the whirling tendrils of the monstrous Sarlacc below.

But beyond making choices as to one’s own race, we too had the chance to define the choices our character had made throughout their lives. These very same struggles mirrored many of the same beats used to flesh out parts of the original trilogy.

I had felt an uncanny sense of symmetry, with recognisable plotlines of winning a podrace, eerily similar to Anakin Skywalker’s victory in the Boonta Eve, a victory that freed him from the clutches of Toyodarian slave-master Watto. But alongside elements that fleshed out the background, props were also featured that colored in the more intricate parts of the background, and brought a galaxy breath and life. As I fleshed out my character, Empatojayos Brand, armed with an hour-long journey through halls of fabled artifacts, scintillating storyboards and wonderful dioramas, many of the props and choices given only pointed at the ability to overcome spells of overwhelming, leviathan-like forces of oppression. They spoke of insurmountable runs in trenches towards an unfathomable objective, of unimaginable strain placed on ordinary people like you and me. 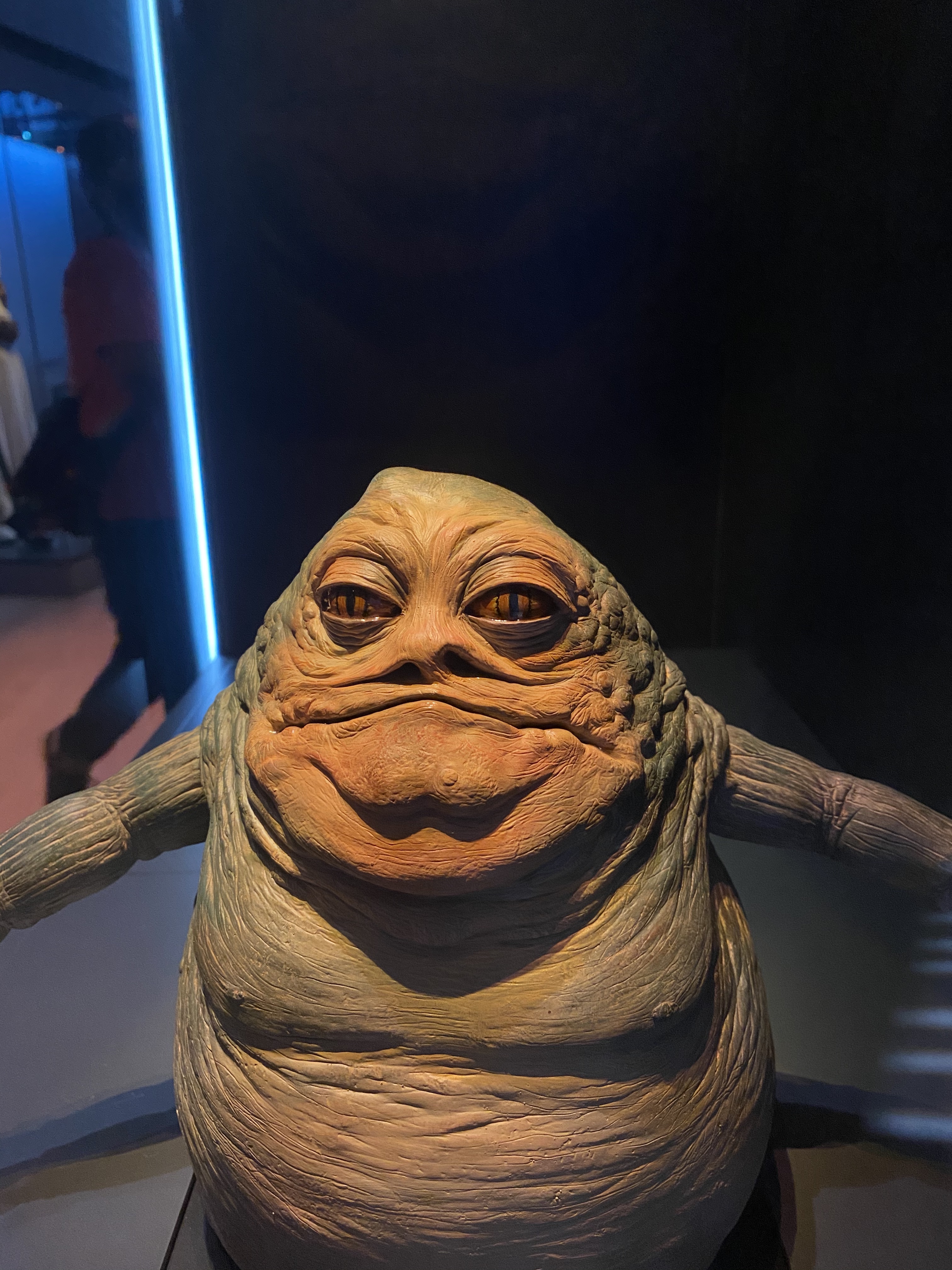 Miniature puppet of Jabba the Hutt used in distant shots

This included a brief glimpse into how the character, Jabba the Hutt, secondary antagonist of 1983’s Return of the Jedi, was controlled. Being almost 5 metres long, the “Slimy Piece of Worm-Ridden Filth” was a mix of human and automatic control, with 4 technicians within the frame. Each member was in charge of a different part of the massive puppet, bringing to life the slothful, slovenly appearance of the fearsome crime lord. Long lost over time due to damage, the exhibition houses one of the remaining pieces of the contraption, Jabba’s eyes which could flick open and closed via remote control, as the technicians operated his arms and prehensile tail.

Such practical effects were also showcased in the costumes of main characters and protagonists such as Anthony Daniels’ original Chewbacca costume from 1977, the scoundrel-gone-good tunic of Lando Calrissian from Empire Strikes Back and Queen Amidala’s robes as they appeared in the Prequel Trilogy. 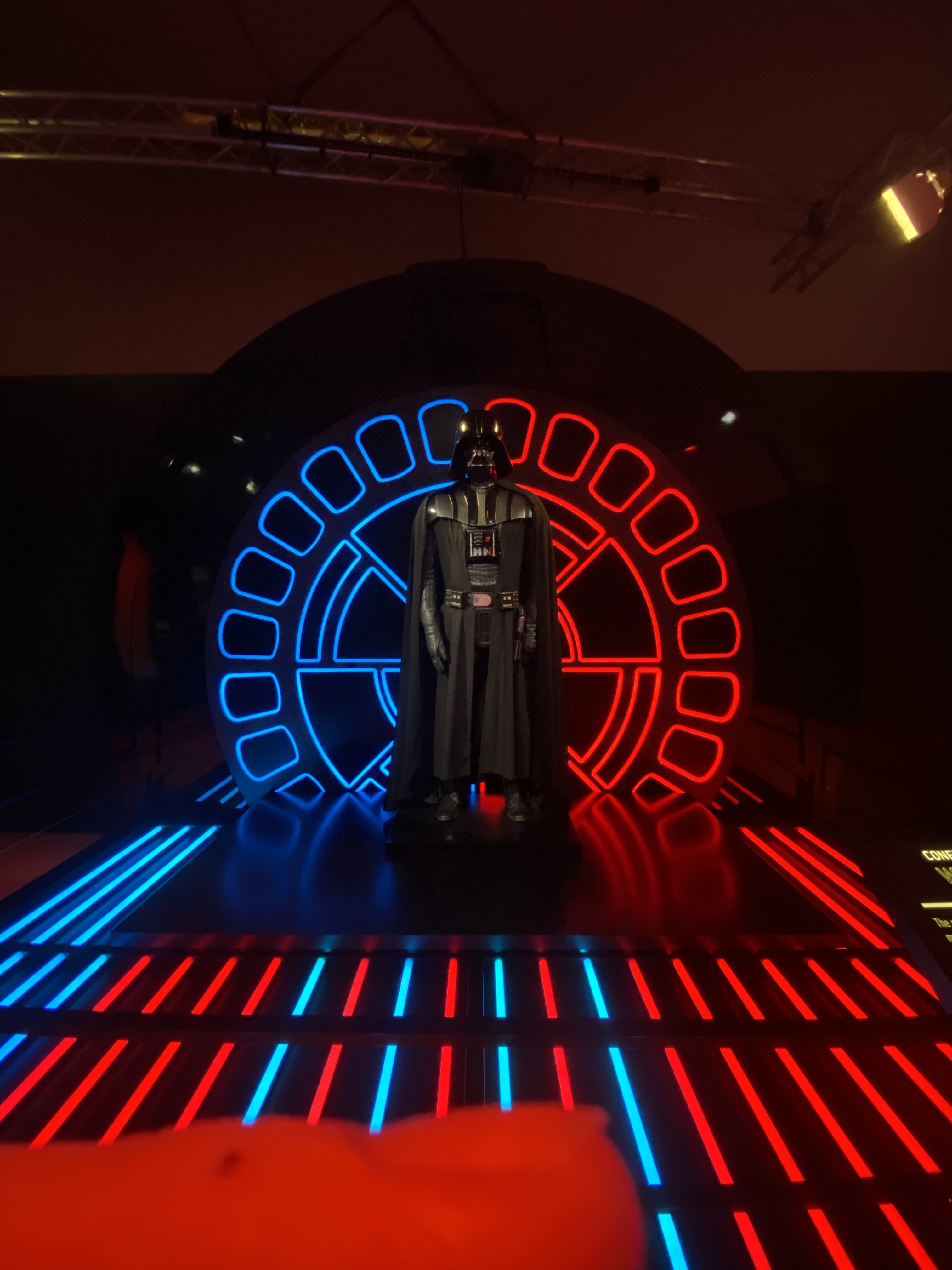 Microcontrollers and resistors were cobbled together to simulate General Calrissian’s rank pauldrons, whilst Chewbacca’s own voice was made from an amalgamation of walrus and bear roars from nature. Even by the last room, stood the costumes worn by the Jedi and Sith characters of the Star Wars mythos, each a master of the lightsaber in their own right, as the figure of David Prowse’s Darth Vader costume loomed large over the entirety of the scene, in front of a background of the Emperor’s throne room on the Second Death Star. 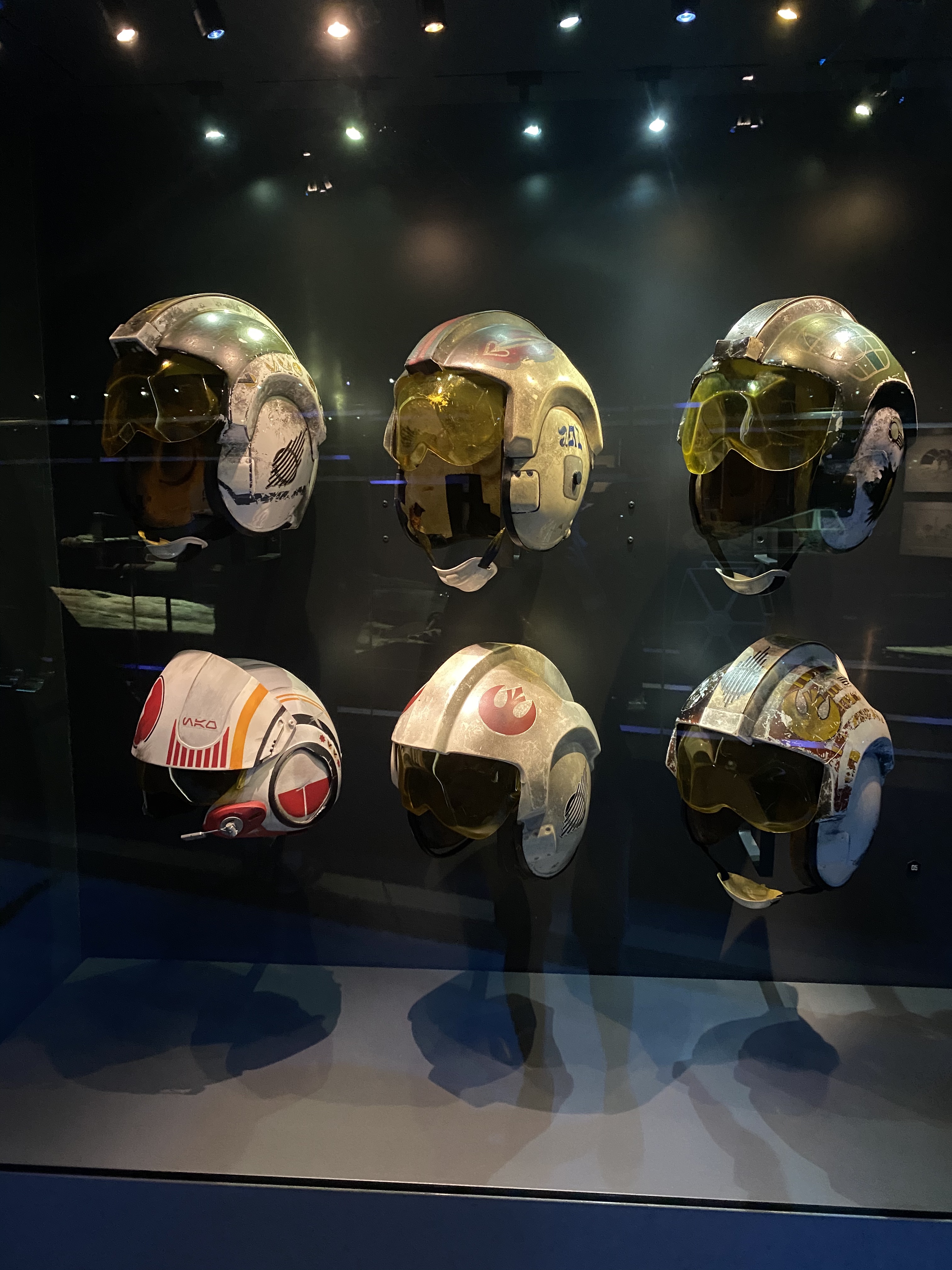 From Chewbacca’s early forms, to the gritty realism of the Rebel Alliance’s pilots as they plunged into the trenches of the Death Star, Identities just highlighted how strongly I admired Star Wars, for its same sense of gritty realism — prevailing despite overwhelming odds. Despite the obvious budget of the more modern films, the smaller gems of ingenuity captured in the exhibition’s showcase of the series’ artifacts represented the depth of detail shown in the guerilla school of filmmaking that the earlier Star Wars films had.

Check out these marvels of technical finesse and storycrafting at Identities!

Star Wars Identities is currently on at the ArtScience Museum until 15th June. The exhibition was first available to the general public from the 15th of January 2021. Tickets can be secured either online or in-person at the venue itself.