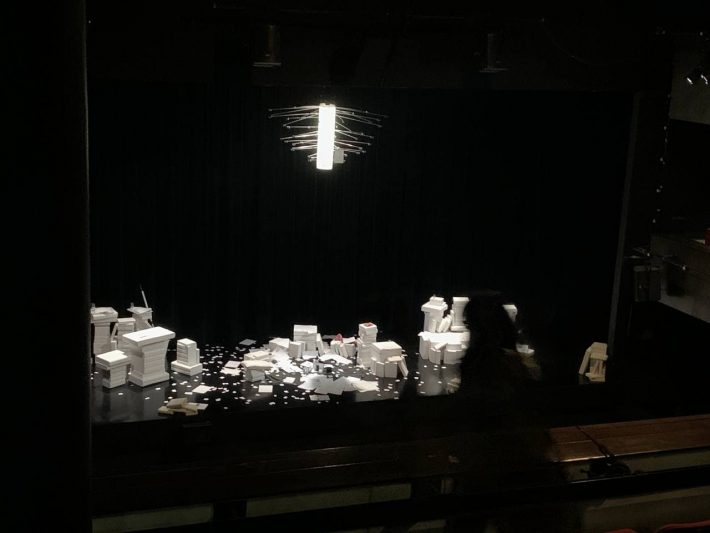 As the effects of the ongoing pandemic continue to be felt, distinct social-distancing measures have changed many of the traditional ways that we enjoy theatre.

Following the hugely successful staging of Tuesdays with Morrie, the Singapore Repertory Theatre boldly reopens with two-person play, The Sound Inside. Written by Pulitzer Prize finalist, Adam Rapp, the play is a welcome shot-in-the arm of emotional warmth for a country beginning to return to a sense of normalcy. It explores a deepening relationship between a cancer-stricken Ivy League professor, Bella Bird and an acerbic sophomore, Christopher John, as they trade heartfelt barbs over Joyce Carol Oates, Fyodor Dostoyevsky and an occasional reference to Yukio Mishima.

Featuring veteran players, Serene Chan and Krish Natarajan, it could not be denied that the two were perfectly suited to the chemistry necessary for us to feel for both characters. Beat for beat, the little flourishes sold the emergence of a beautiful friendship between the two, as the defenses peeled back. A wayward touch here, a gaze left too long. It was startling to see the two find a strange kindredness, and played with such verve and emotion, deepened the pain we felt with the ends their friendship would reach. With their own unique blend of prowess and panache, Natarajan and Chan have achieved a distinct status as masters of their craft in bringing these characters to life, to make us feel for their own traumas and anxieties.

But to bring it back to one’s own thoughts to the narrative. Focalised largely from Bella’s perspective, her status as professor of creative writing guaranteed literary inside jokes galore, recognisable by long-time fans of Oates or Dostoyevsky. Breathy monologues rattled off streams of writers in Garland-esque Mid-Atlantic, reflecting director Cherilyn Woo’s masterful choices to highlight Bella’s stultifying, yet intimidating passion for the literary arts. At this point, it was interesting to see how intelligently arranged the set was by designer Petrina Dawn Tan, as Bella’s own set seemed to blend into the world that she had engrossed herself in. Framed entirely by white, it was crushing to see Bella’s increasing self-awareness of her mortality and her own legacy, surrounded by books wholly indistinguishable except for her own distinctions.

Even this seemed to speak of a wider malaise and disconnect from reality, as Bella finds commonality in the brilliantly played Christopher John (played by Krish Natarajan, of Patch and Punnet fame), a student of Bird, whose similarly manic and mercurial disposition hinted at the underlying disinterest he feels towards those around him. Natarajan’s delivery spoke to an underlying ferocity of someone sorting through underlying trauma, one which I felt brought a distinct sense of authenticity, and darkly relatable tics of social awkwardness.

As the two twirl in a dance of growing camaraderie, it was the barbs and little asides that highlighted how poignant, even darkly relatable the narrative was. They brought a wholesome energy that is sure to surprise even the most hardened theatre fan.

The Sound Inside is currently held at the Singapore Repertory Theatre from 10th March. Previews were first available from 10th – 15th March. Tickets can be secured online. TraceTogether is currently being enforced in theatres nationwide, do remember to have the app or the Bluetooth token on you!