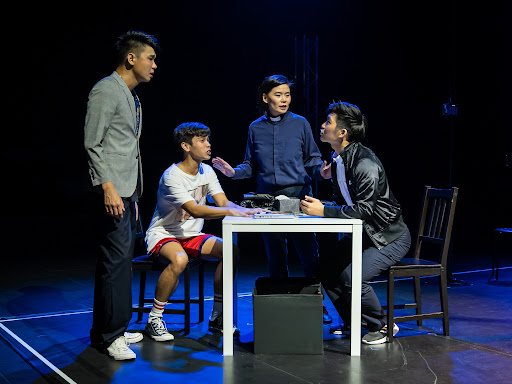 Behind the eyes of two antagonistic characters lies a proverbial red string of fate binding them together – a forced reckoning of their pasts that would set the ball of change rolling. While the age-old adage of forgiving and forgetting is well-known, it isn’t always as simple as it sounds.

Lion, written by up-and-rising playwright Jedidiah Huang, pits two characters with complicated histories against each other. Yi Kai, a “reformed party playboy jock”, wishes to adopt a son. His chances were dashed, however, when he was interviewed by the orphanage’s case manager – Jack, who suffered from a humiliating slew of bullying and abuse under the hand of Yi Kai during their schooling days. Despite the eventual rejection, Yi Kai would not let this setback stop him from uniting with Daniel, the orphan who would soon be an unsuspecting victim of a tumultuous whirlwind of conflict between the two forces.

Gateway Theatre’s Black Box is configured into a thrust stage, with the key set piece of the raised circle inviting audiences to reflect about how they participated in perpetuating the painful cycle of hurt and toxic masculinity. The minimalist stage is littered with neutral-coloured bits of mismatching furniture, foreshadowing the darkness to come. The serious tone is carried over in the costume’s colour palette – varying shades of blue, black, and white emphasise the poignant sense of the character’s plight. Haunted by symbols of their traumatic past suspended from the ring – the pair’s destructive inability to let go triggers their agonizing decline.

Among the stellar cast of characters performed and portrayed, Jack’s complex character was what stood out to us. Seen and believed to be among the best employees in the orphanage, the cracks behind his lofty image started to appear ever since the arrival of Yi Kai. Pent-up feelings and barely concealed emotions began to get thrown around as Jack struggled to stop the memories of the past from surging back into his head. His diplomatic mannerisms gave way to vengeance as he pulled out all the stops to keep Daniel away from Yi Kai.

The set design’s unique circular layout was cleverly exploited to paint the ebb and flow of power. This was clear in the scene where Jack was confronting Yi Kai through a phone call; all of us in the stands could have sworn that we were witnessing a tango between two broken people vying to stay on top.

And when witnessing all of this, one can’t help but wonder – aren’t we all broken on the inside? 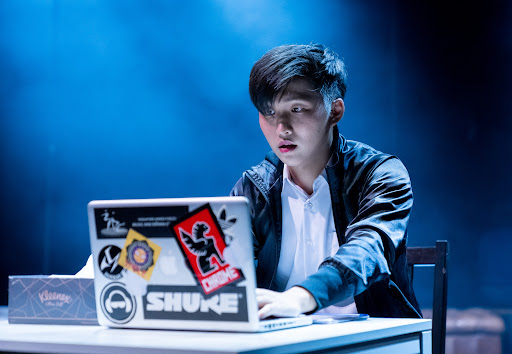 Pastor Sam is privy to this idea, as her starkly open performance where she orchestrated the thankless job of keeping everyone (especially the vulnerable Daniel) in check, was the breath of fresh air the rest of the cast needed. However perhaps inevitably, our tough-minded heroine herself still suffers the woes of uncertainty; an especially poignant moment as she was cradling a distraught Daniel on a set awashed with purple hue, while longingly looking far out into the distance at something – if anything.

“Sometimes you have to be a lion, to be the lamb you really are.”

But what if you were forced to be the lamb? What if an apex predator forced you to your knees as a trembling prey? In the play, we are introduced to the nightmarish landscape of vulnerabilities and manipulation. Unable to meet each other’s eyes, the characters must learn to be honest with not only each other, but more importantly, themselves.

In an interview, actor Clement Yeo – who portrays the layered character of Jack – points out the issue of bringing our own prejudices into our adulthood. “Everyone is acting out based on their past histories and it’s forgivable as we are only human. We as adults are in a position of higher power, and so we must learn to let go of our biases as we teach the younger generations. Be like a lion, take pride in whatever you believe you are and be badass in everything.”

Echoing his sentiment, Bryan Tee – who plays the orphan Daniel – reminds us: “There is no one clear side, there are many flawed perspectives  and misunderstandings. Everyone has a past and people can and do change. Being a lion doesn’t only mean being the majestic king of the jungle, it can mean being the big gentle and loving cat.” 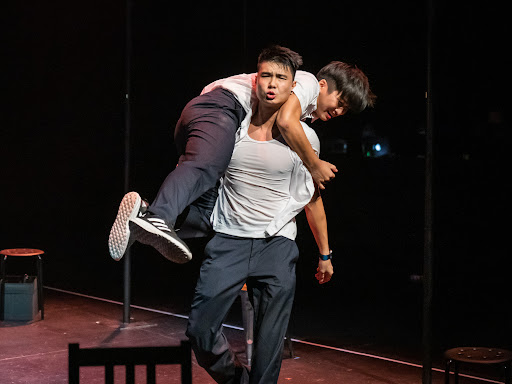 While the staging effectively conveyed the message of the suffocating unforgiveness, more could have been done to elevate the captivating script to new heights. The lack of ambient music was a missed opportunity for a more immersive experience to fill the emptiness of the black box. The general washes of the set did not fully reflect the nuances of the scenes, while occasional harsh spotlights obscured the actors’ expressions. The constant change of scenes also did not help in dispelling the audience’s disbelief. However, these few nitpicky details did not detract too much from the cast’s undeniable chemistry and believable relationships.

Lion was an unforgettable emotional roller-coaster with unpredictable twists and turns, leaving you wondering who the true villain is. Roles are paralleled, inverted, and subverted under a system that has failed the powerless. Hinting at an uncertain future shrouded by a dark ominous cloud as the cycle repeats itself, the show ended on a tense note.

Yet, there is a quiet hope. A gentle reminder to be kind, and that everyone has the capacity to change.