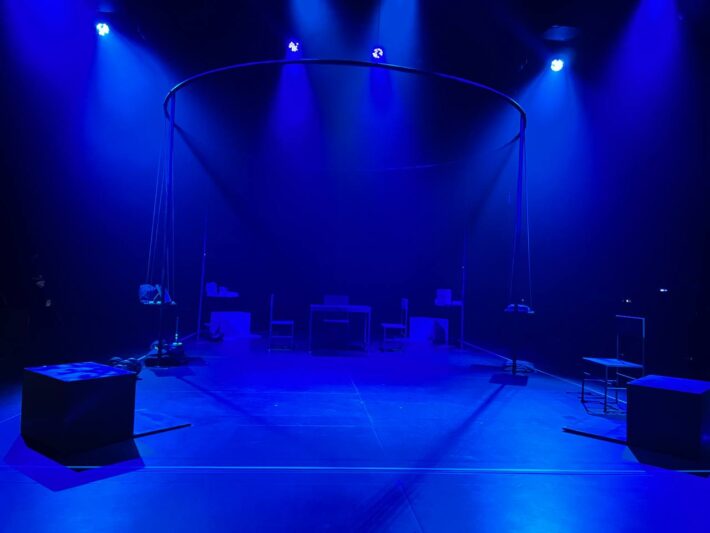 The Wright Stuff, the playwright mentorship programme by Toy Factory Singapore, returns this October with three new plays: The Time Machine, Lion and Skin. Skin was the last of the three plays to open, bringing the three-week festival to a close. The play written by Psychological Science student Koh Tian Seng takes us through the life of Tan Yang Xin, a man who has achieved the “Singaporean Dream”. However, his success starts to fade when he meets his soon-to-be father-in-law, Pak, where years of resentment and unpleasant history come between his marriage with Afifah.

The play touches on several important topics in our society: interracial marriage, religion and the LGBTQ community. Bodybuilding and gymming were central plot points of the play. This choice seemed rather random at the start of the play, but as the story progressed and I began to understand Yang Xin’s past, I realised it was a cleverly chosen plot device. Bodybuilding was a way for Yang Xin to cope with his childhood trauma of being teased for being an “ah gua”, an effeminate male, in his youth. While bodybuilding was used to exemplify this theme and build empathy for Yang Xin, I felt that too much emphasis was placed on it. This distracted me from the real issues that the play attempts to discuss. It was, however, a good attempt at making such difficult topics more accessible to the audience.

One of the most well-executed parts of this play was the relationship between Pak and Yang Xin. What began as a relationship appearing to be filled with hate and resentment was slowly revealed to be one of deep-rooted love akin to that of a family. Despite Yang Xin’s heartbreaking backstory of his struggles with sexuality, I found it difficult to empathise with him. In fact, I felt angry that he had been deceiving Afifah of his sexuality. Additionally, I felt that the overemphasis on bodybuilding had also mellowed character development.

I was quite impressed with the set design. It was a very small space, which I can imagine made the planning process rather challenging. The play did a good job at using light design to effectively divide the set into four main settings: Yang Xin’s room, the gym, Afifah’s home, and Pak’s gym. The transitions were smooth and it was inspiring to see theatre thrive without extravagant props and design. However, at certain points, the actors who were not performing sat in front of the action, which blocked my view slightly.

It is heartening to see the Singapore theatre scene touch on such important topics, especially since they tend to be underrepresented in the media. Skin is a true exemplification of how theatre can be used powerfully to make a statement and challenge social norms.