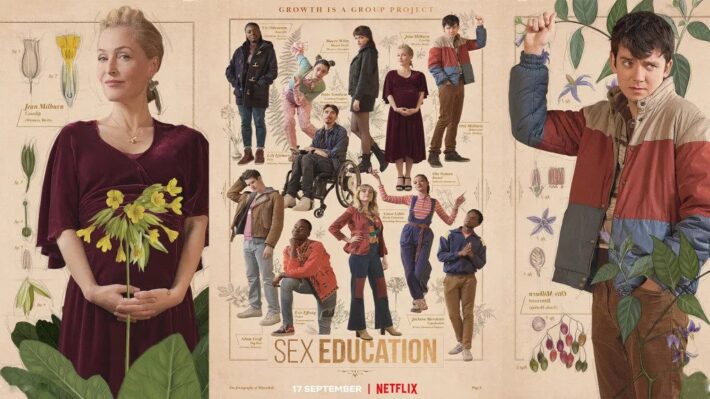 A Sex Education is a teen drama series that adapts the well-known American high school setting to the UK, Sex Education features a where 17-year-old Otis Milburn who opens a sex clinic in his school with his schoolmate Maeve Wiley. Otis’ expansive knowledge of sex comes from his mother, sex therapist Jean, who is a sex therapist. He utilises this knowledge to advise his schoolmates on their sexuality — all while navigating his own sexual issues.

Its Sex Education’s first season premiered on 11th January 2019 and was streamed by over 40 million viewers in its first month. Its highly anticipated third season debuted on 17th September 2021, skyrocketing to #1 on the Netflix charts in its opening week. But beyond its worldwide success, this teen drama stands out from the rest of its competitors in the same genre.

Teen dramas have had a somewhat lackluster track record. While television shows like Teen Wolf, Riverdale and 13 Reasons Why have dedicated young fanbases, they lack fully-realised and complex characters. At first glance, Sex Education’s unique premise appears to fulfill the teen drama mould. With “sex” literally in its name, how different can this show be from other teen dramas and their hyper-sexualised teenagers, weak plotlines and stilted dialogue?

From the get-go, Sex Education is quick to exceed expectations. It distances itself from every other teen drama by making all of its characters feel like real teenagers. Teenagers that look, speak and behave like teenagers. Teenagers with real problems about family tensions, friendships, their sexuality, self-confidence, and the responsibilities associated with growing up.

Many teen dramas gloss over the importance of this transitionary period to adulthood. Instead, they, instead choosing to romanticise this period of life it, providing an escape for its letting their audience escape and to live out their fantasies through an unrealistically attractive cast in their mid-20s playing teenagers. On the other hand, Sex Education enjoys constructing exaggerated and extravagant sequences, but never  without once sensationalisesing the life of a teenager.

On its surface, the show is about the sex clinic, but its premise is just a vector to illustrate the show’s true theme of connection and communication.

The sex in the show is awkward, uncomfortable and messy —- often due to misunderstandings between both parties. This underpins the larger idea that while it is uncomfortable to be vulnerable, meaningful communication is crucial for people to develop deeper relationships.

This core idea of connection is illustrated through every character’s interactions with each other. Each teenager is introduced as a very specific cliche from an American high school drama –- the gorgeous popular mean girl, the sassy gay best friend, the sporty perfect boy-next-door, the bully, and the token racial and LGBTQ+ diversity characters.

But the writers take the time to unravel the layers of each character. Snippets of their backstories are planted throughout the show, allowing us to progressively discover their true characters and understand why each person is built a certain way the way they are. Furthermore, the diversity in the show is never forced upon the audience. The diverse nature of a character only makes up a small part of their full characterisation, it and is never their sole defining personality trait they possess.

No matter how one-sided a character appears to be, they develop into fully-realised characters that have with struggles and growth that extend far beyond the limits of their token diversity labels and high school stereotypes. The characters ricochet off one another and push each other’s arcs forward, creating an intertwined set of characters that blossom together through their relationships with each other.

Unfortunately, Season 3 is inferior to its first 2 seasons, suffering from an overcrowded cast and a messy plot that shelves its main characters. However, it continues the show’s signature trait of developing characters beyond their stereotypes. The audiences’ love and attachment to its unique characters still makes Season 3 an enjoyable and highly entertaining experience.

With its fourth season already confirmed, Sex Education needs to ensure they conclude their story neatly without unnecessarily overstaying their welcome. Hopefully, Season 4 will be its last — and the cast and crew can bow out on a high, with the knowledge that they have created something truly special.