Skip to content
Loading...
Latest articles
USPresents: Two Wandering Spirits, Three Government Officers (and other assorted ghosts)
I Am What I Am – The Latest Animation Milestone via Hyper-Realistic Lion Dances
Harvest Moon – A Cafe Pop Playlist by Where Are The Fruits
Characteristics of Modern Living Exhibit A
Dances with Mushrooms
InterviewsTheatre 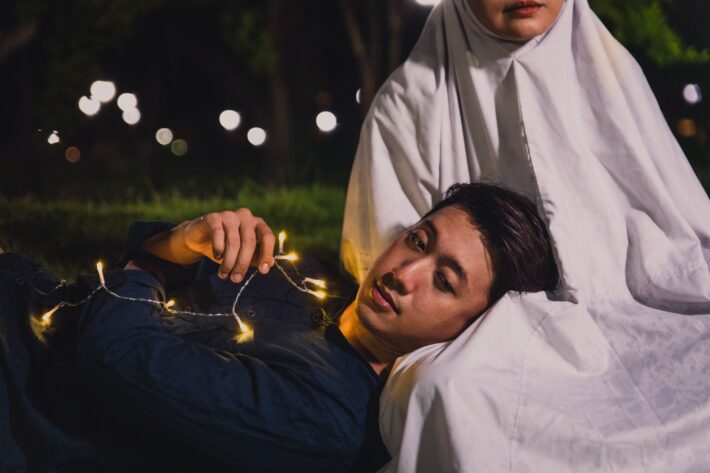 These days we wake up to a ceaseless noise. Our phones ping uncontrollably. ‘News for your morning’, ‘JUST IN’, ‘ Sent by Gov.sg’. Your old classmate, a distant friend’s friend, your relatives are all reduced to mere numbers and cases. Will you be next?

It’s been three years. As you leave the house, you slip on a mask you barely feel anymore. Eyes cast downwards you shuffle to work or school – no point in looking up, we all know what you’ll see. It’s become terrifyingly monotonous, living with anxiety through the instability. One public address or circular is enough to flip your world upside down.

Acknowledging this fatigue is the 18th edition of the M1 Singapore Fringe Festival. Centred on the theme of ‘the Helpers’, human kindness and care step into the forefront in a time when one can’t even speak on the train. How isolated and lonely we all have grown. Can we stretch our hands across class and communities? Can we fix this brokenness and salvage these relationships? Can we learn to be human again?

From 12 to 23 Jan 2022, works from across the country and the globe attempt to answer these questions about the intricately fragile human relationships. None more than in Rindu di Bulan (明月千里寄相思) performed by Rupa co.lab. Focused on shining a spotlight on the contemporary Malay person in this era of separation, local theatremakers Hazwan Norly, Nabilah Said and Nessa Anwar take a story of love and hope that transcends time and space to the stage.

Playwright Raimi Safari manages to weave two complex stories together: the Chinese myth of Chang-Er and the heartbreaking struggles of an everyday, commonplace single mother. A parallel is drawn between Suraidah’s tense relationship with her adopted, non-mahram son Azim, and an amnesiac goddess trapped on the moon away from her true love, with only her rabbit companion. From space to Tanglin Halt, an exclusive interview with Raimi Safari tells us more about how he managed to tackle the dark side of the moon – the hidden narrative of transracial adoption in the Muslim community.

What was the inspiration behind Rindu di Bulan (明月千里寄相思)? Tell us more about the genesis of its title.

For me, it was a marriage of two things. And that is my fascination with myths and legends, particularly ones that exist outside of my culture. I actually grew up consuming a lot of Chinese TV shows on Channel 8, and I have always been transfixed by shows like Legend of the Condor Heroes, The Eight Immortals, Journey to the West, etc. And one of the most forlorn stories I could ever remember was the story behind the lantern festival. (This I remember vaguely reading from our primary school PETS textbook. But I might be wrong.)  About how one can be so moved by love that it motivates one to make a sacrifice of such a price. So bearing that it’s always easier to access things that we are passionate about as material for writing and that I cannot possibly just present a retelling of a Chinese myth on stage, I decided to intertwine it with another story of love and sacrifice, in this case, the story of a transcultural adoption.

I was given away at birth. So I think it cuts across another level for me too. I thought it would be an interesting topic, one that perhaps not been told on stage. In Islam, it gets a little tricky cause we have the issue of modesty, where we do have to cover up certain parts of the body in front of strangers who are not tied by familial bonds. So in this case of transcultural adoption, we see a Muslim Malay mother having to grapple with the hard truth that her relationship with her adopted Chinese son may bear some complications in their day to day lives. Does love then triumph over religious guidelines?

I am also aware that adoption may have been more common up till the 80’s. But after the dwindling of our population, adoption, whether informal fostering or legal adoption, may not be as common anymore. And that could really provide fodder for important/interesting conversation.

How and why had you decided to pair the two narratives of Chang Er and a Malay family? What challenges did you face in marrying the two spheres?

Thinking back, and in my talks with Rupa co.lab, I am quite convinced that it was perhaps just a moment of madness where I came up with this decision to pair the two narratives. Especially when the two stories may appear at odds with each other and there is very little connectivity on the surface.

So maybe that was the biggest challenge for me. To then tease out the similarities, the thematic echoes and connect the two stories as seamlessly as sensitively as possible.

What is your favourite line from the play?

Lol. My favourite line unfortunately did not make it to the final cut of the presented script. But here goes! (It was a scene between the husband of the female protagonist in this play with a random Chinese neighbour.)

[Wife ah, you see… next door the couple got baby already…

You want to make baby or not?]

Do you feel that the direction of your script has stayed faithful to how you had initially envisioned it? And if not, what would you have liked to see differently?

Tricky question. But I think, at this point of the interview, when we are mere days away from presenting the final piece, the anxious playwright in me would actually want to change everything.

Do I even want to change the whole dang script? Possibly.

Nearer to the production date, I was having several bouts of anxiety attacks.

I then chose to sit out for a bit from rehearsals. (Important side note: mental well-being comes first.) But this is of course just something I needed to work with myself. My last full-length piece was in… 2014? And being away for too long sometimes can ferment really loud negative voices in your headspace. I was then reminded that actually, this is the process that all playwrights have to go through and there is no way of escaping it. We have to surrender and trust the process and the team.

Adib and the team have always been nothing but supportive and so giving to the whole piece. There is a lot of heart and a lot of tears put in this work. I also understand that with collaborative work, there’s are bound to be clashes of heads, but I suppose that’s what you get when you put highly invested, passionate and creative people in a room.

What is a conversation you hope your audience will have among each other as they step out of the Studio?

Other than to discuss the pertinent themes that are present in this play, such as

the poignant issue of love, familial bonds and sacrifice, I hope some time would

be spent on talking about Rupa co.lab as a collective. I hope audience will

reflect on the growth we had as a collective, and through this offering of

Rindu di Bulan (明月千里寄相思), that they would be equally excited about what is to come.

In addition, I hope Rindu di Bulan (明月千里寄相思) can also stir their emotions enough to make them realise how much perhaps we have missed a sense of normalcy. That we do in fact miss the theatre, that we do miss watching and supporting full written works, that we miss being moved by the magic of what theatre can do. A huge shout out to the M1 Singapore Fringe Festival and The Necessary Stage for allowing and providing us a platform to do this. 🙂