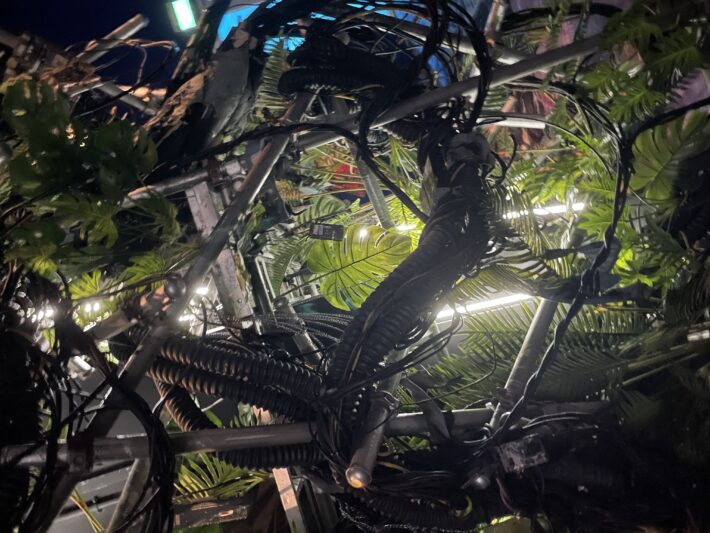 The astounding quality of our daily existence is mostly the speed with which modernity and electric modes of communication conduct themselves. From the humble chime of electric clocks to the steady hum of MRT trains rushing by, every aspect of our lives is just  an accompaniment to the metronome of modern scheduling.

In these fast times, Korakrit Arunanondchai’s exhibit, A Machine Boosting Energy Into the Universe, seeks to unsettle key paradigms of understanding when it comes to modernity and its enacting in structures around us. Drones, planes, and smart devices are synonymous and ubiquitous in our world, resetting epistemologies and methods of making meaning within them.

As a welcome shot in the arm, the exhibit chronicles several eye-catching sculptures that truly interrogate what it means to be human. From the centrepiece of the room, a weird syncretic steel monstrosity more welcome in a spare parts warehouse, human figures are built literally within the sculpture. Bodies caught in a strange purgatory of half-scream, half-wail pin this rosy picture of the contemporary whirlwind, forming a grotesque piece melding the worst of modernity alongside the best of individuality. Quite literally a hurricane of mish-mashed parts, its edges speak more to rampant consumerism, waste production, and the endless cycle of waste that modern living engenders. With disused plastic bags strewn along its spires, drone parts, and switchboards, the behemoth-like central spire offers an unsettling critique of how we interpret beauty in a world so shaped by the electronic.

Just alongside this macabre mangle, salvaged refuse from the pits of everyday life form the large majority of the pieces, finding within them treasured memories of sentimental value. Grotesquely enough, the main feature of the exhibit featured mannequins at rapt attention viewing a gaudy, cringe rap video. With mannequins peering on with their rapturous immortal gazes, the viewing experience commented on our passivity and inattention as passive onlookers of modern media. Helped no less by the faked rap video, the intentionally gaudy and ironic graphics screamed out in odd relief, reminding us of the sheer impassivity and apathy we as viewers have grown accustomed to. Repetitive motions echoed in the name of fake style scream out for attention, pastiching the true reality of the exhibit’s critiques on boredom in contemporary times.

Odd drone parts and fake flowers jut out from plastic boxes alongside the exhibits, with motifs of modern decay being oddly enough fresh for our understanding. With human prosthetic parts being synthesised with that of stones and metal, the artificial seems to point out a reality irreversibly shaped by waste and the world around. Given how intrinsically tied to hallmarks of our reality waste has become, what then is a reality based on waste?

At this exhibition, I was particularly appalled by the raw, incisive energies that characterised the creation of the installations around me. Savagely tearing into modern society’s conception of materialism, the critical focus of the exhibit gave no quarter for the frenetic pace at which humanity continues to burn through its resources. At this rate, it seemed the exhibition exhausted itself on its critique of the synthetic-human hybrid, and questions of how existence and memory can be irreversibly shaped by it. With memories increasingly shifted into the digital sphere (how we keep cloud backups), there becomes something especially ethereal about secreting our most prized possessions behind something as equally ethereal and abstract as the Internet can be.

It seems then that that is the exhibition’s point—be appalled, be shocked. Be despondent with the reality that it truly is, and I really am. The uncanny synthetic trash-human hybrid is here to stay, it seems.

See it too, and be scared.

A Machine Boosting Energy into the Universe is currently on at SAM@Tanjong Pagar from 14th Jan to 3rd May. Admission is free-of-charge.