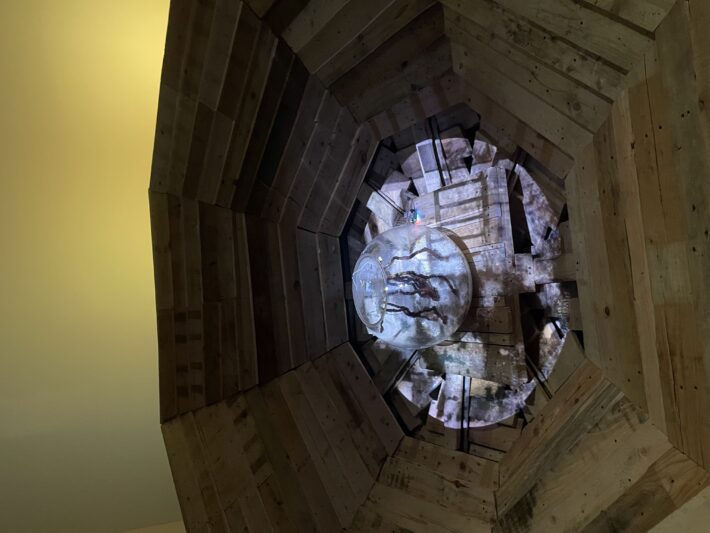 Yes, it’s me, the writer, telling you to stop.

I’ll give you about a minute, take your time.

Well, hold onto that thought. I think you’d agree that sometimes the beauty of our world is that the strangest, most wondrous things are the sounds of things that often go neglected each time we head on our commute. And for today’s feature, REFUSE, there’s something irretrievably beautiful in the sounds of mushrooms.

Now, I promise it really isn’t three years of writing for ArtJam that’s getting to me and I’m DEFINITELY not trying to say there’s some sort of global conspiracy (that Big Mushroom doesn’t want you to know about this1!!111!!)… but a mushroom does make sounds when it’s hooked up to electricity. Since the biology of a mushroom responds to environmental features akin to how an ant leaves pheromones on a floor for its ant buddies to follow its path beyond things they can’t see, individual mushrooms similarly throw out little electric impulses that allow us to melodise its functions.

As trippy as reading that a viewer hears mushrooms like listening to music, the exhibition is real. It channels the melodic impulses of these electric impulses, which respond to external stimuli, especially when we see this project really flower in its instrumentation. These mushrooms are hooked up to lights, and quite literally charged with the static impulses of the Observatory’s music. Bumping along to the music, the mushroom responds through little static bursts that challenge what we might really see as music.

With little mushrooms revealing this strange innerworld that exists around us, these static impulses really are borne out in mycologics, or systems of logic that are inaccessible to us as viewer-listeners. The responses these mighty mushies throw out are just operative of a deeper, quieter logic we don’t have access to.

And within all of this, the decompositionary really dominates, overwhelming and mounted onto guitar substrates, each one a tiny little mushroom cog in a wider strandbeest of other fun guys singing along to the sound of their voices being beamed back. Increasingly surreal collages of algorithm-decomposed archive footage really do add to the unity of effect present here.

Even within the wooden pallets arrayed around the room, it was genuinely surreal to hear how a universal symbol of decomposition and disuse can fall into something entrancing, hypnotic in its qualities. With how the inner world could reveal so much, the wooden pallet served a purpose in also being the surfaces on which these mushroom spores were recovered, and incredibly revelatory in the level of beauty to be seen in these reclaimed symbols of decomposition. Watching mushroom dendrites hum and buzz cheerily away is just splendid.

Tucked away in a nondescript warehouse on the corner of Keppel Port, the exhibition is housed in the new wing of Singapore Arts Museum, a stone’s throw away from Tanjong Pagar Railway Station. So hear what your local mushrooms have got to say – maybe the mushrooms in your mee pok can tell you what’s really pushing their buttons!

REFUSE: The Observatory is currently running from 14th Jan to 17th April, over at the Tanjong Pagar wing of the Singapore Arts Museum. Admission is free of charge.