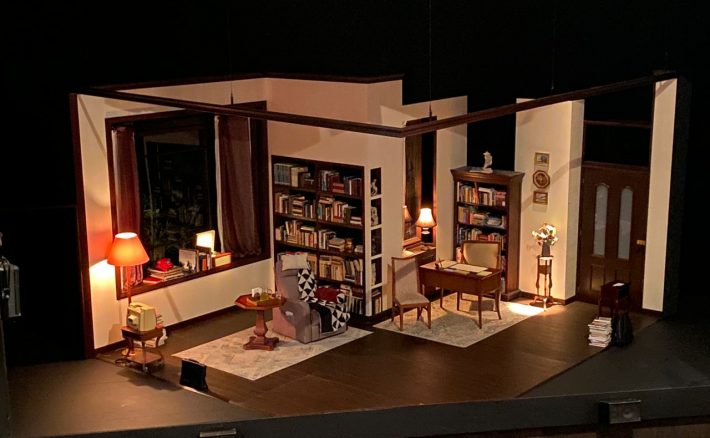 The Singapore Repertory Theatre’s adaptation of Tuesdays with Morrie left the audience teary eyed. It is no doubt that the play touched the hearts of the audience, to the point where sniffles and gasps of air could be heard resonating in the theatre.

The play is based on Mitch Albom’s novel with the same title, taking the audience through an old professor’s, Morrie, last days on earth and his interactions with former student, Mitch. The play is narrated mainly from Mitch’s perspective, and yet, provides us insights to Morrie’s thoughts and life lessons through their conversations.

Actors Remesh Panicker and Benjamin Chow had great chemistry together, and when coupled with their brilliant acting, the adoring teacher and student relationship was convincing to the audience. Panicker portrayed Morrie wonderfully, where each scene was able to highlight how Morrie was slowly inching closer to death. This was done not only through Panicker’s physicality but in his voice as well. Perhaps the good acting played a role in how impactful the ending scene of the play was.

However, the play was admittedly a little too draggy. The introduction of the play felt like it could be more brief, especially since there were not many interactions between the two actors who were placed on opposite ends of the stage. Although, this could be intentional as a symbol of how they eventually grew closer to one another as the play progresses it, unfortunately, felt static. Additionally, the suspense of Morrie’s death felt like it was unnecessarily prolonged, if I dare say, making his eventual death a little more expected and thus, less impactful than it could have been.

The set was well designed. The set portrayed Morrie’s living room, and yet, it was able to capture other settings beyond the living room alone. Simply put, the set was well partitioned where exiting towards the back of the set is the kitchen, and the extreme corners of the stage was an undefined space that was used to signify the outside of the house and even inside Mitch’s head. The set allowed for multiple entries and exits to show a change in time, a change of scene, and a change of mood.

This may come as news to some but despite the ongoing pandemic, the theatres are open again! Singapore Repertory Theatres took safe distancing measures seriously, where empty seats were left between each group of audience. Additionally, efforts were also taken to minimise the intermingling between audience members from different stalls. With the measures put into place by the theatre company and the wonderful production, the experience of watching a play in the time of a pandemic felt like one that was safe and worthwhile.