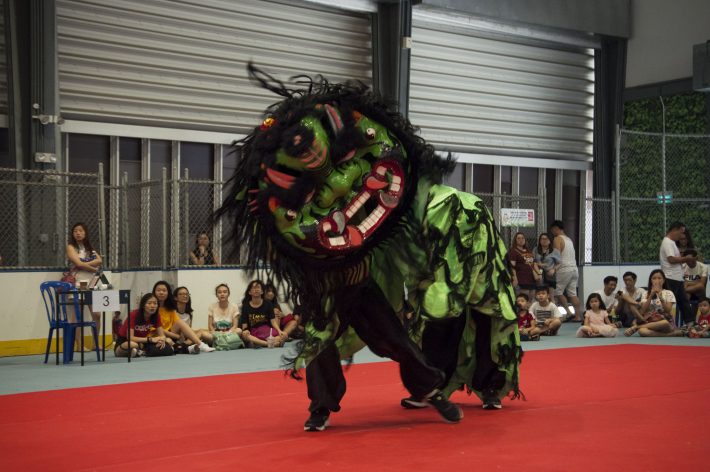 A lot of research goes into every article we print on these pages. Other than just, well, attending, we think about the backgrounds of the bands and musicians
we listen to, the contexts in which the plays we watch reside, and the intentions and headspaces of all the creators involved in every experience we cover. Some pieces naturally require more searching up beforehand, but nothing has ever been as far-out to me as the one Saturday morning I spent in Tampines desperately googling “lion dance” on my phone.

On 30 March, NTU CAC Dragon and Lion Dance Troupe led the annual NTU Institutional Lion Dance Competition (ILDC), held at the Arena@OTH. The fifteenth edition of the competition brought together competitors across four categories, a raucous crowd of supporters, and one very out-of-place writer trying to figure out exactly what was going on at each moment. Fortunately, I later managed to catch up with Dragon and Lion Dance Troupe co-chairperson Benedict Teo, who offered more insight into the goings-on of a lion dance competition and lion dance in general.

At its core, the NTU ILDC incorporates four separate competitions according to these categories: Primary, Secondary, Female, and Tertiary. Each segment was subjected to judgement according to rigorous national standards by invited judges from the Singapore Wushu Dragon and Lion Dance Federation, and four champions were eventually crowned. This presented audience members with a unique opportunity to experience lion dance performances across the spectrum; primary school kids putting on a lion dance are undeniably cute, but this paled in comparison to the kinds of spectacles and acrobatics we were presented with at every turn during the Tertiary segment.

Interspersed throughout the various contests were displays by troupes from within and outside NTU, notably a dragon dance performance by NTU’s own troupe, and a Green Lion performance by Tiong Hwa Qing Shi Ti Yu Hui. The latter performance was especially interesting, as Benedict explained; Green Lion performances are rarely seen in Singapore today, even though the art form has a long and storied history. This unusual sub-genre of lion dance noticeably features a flat faced, grotesque lion dressed in dark green and black, as opposed to the fierce features and bright colours we associate with the lions we normally see.

Apparently, this branch of lion dance emerged in 17th century China under some interesting circumstances. In Mandarin, the phrase 青狮 (qīng shī, “green lion”) is pronounced the same as the unrelated 清师 (“Qing army”), so these green lions were used as representations of the savage northern Qing soldiers by their enemies in Southern China – some even went so far as to sometimes use green lions as training dummies and targets. Understandably, this historical context is often lost when the lion dance is transplanted to our sunny island, perhaps contributing to the death of Green Lion performances in Singapore. Such a shame though, as the story of the Green Lion is just one dimension of lion dance that we usually overlook (not gonna lie, it also makes for some cool trivia to pull out on your unsuspecting friends to make you look more cultured.)

As an audience member, this is all well and good, but for those involved in the local lion dance scene, the NTU ILDC is much more than just a day out. For participants, the competition serves as a platform to showcase the hard work and effort they put into their craft year in and year out. More than that, however, the competition is one of the key drivers of lion dance in Singapore. Benedict outlined the importance of the competition, explaining that “institutional lion dancers form the base of the pyramid of lion dancers in Singapore, which means that supporting them is an act of nurturing Singapore’s next generation of lion dancers”. This drive to keep bringing up young and aspiring lion dancers is what has kept our Dragon and Lion Dance troupe tirelessly organizing the NTU ILDC for the last fteen years; in fact, this competition has its roots in an even earlier attempt at organizing a yearly Lion Dance Display.

Now, I will probably never don the head (or tail) of an actual lion, but if I took one thing away from my experience at the NTU ILDC, it’s probably that lion dance is one of the most interesting and often overlooked aspects of the Chinese culture that stretches back hundreds of years and will probably live on for hundreds more.

The next time you see a lion dance while you’re out visiting during Chinese New Year, don’t hesitate to look up more cool stories about it. You’ll probably nd that it’s much more than just dong-dong-chiang.