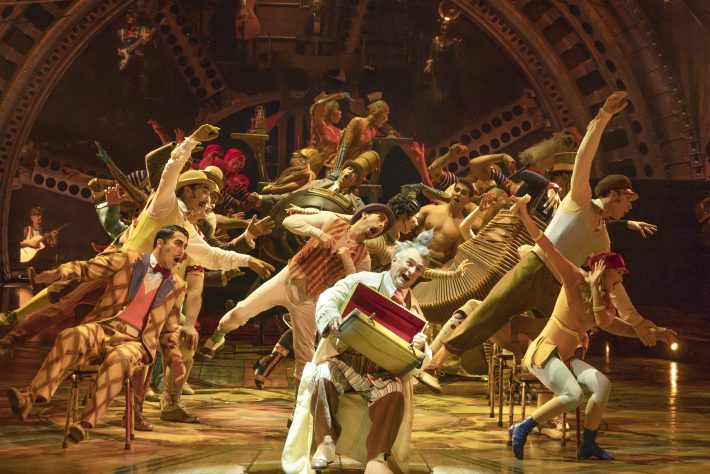 Ladies and gentlemen, boys and girls, children of all ages, the circus is here! From now until 5th August, the Cirque Du Soleil will be performing right here in Marina Bay. The world-renowned Canadian entertainment company is presenting their critically acclaimed touring show, Kurios: The Cabinet of Curiosities for the first time in Singapore.

This time, the cirque is making some major changes for this production. From the moment you lay eyes on the tents, those familiar with the Cirque Du Soleil will notice that the Cirque has exchanged their iconic yellow and blue tents for a subtler, minimalistic white and grey. This is part of the Cirque’s commitment to energy efficiency.

Many Singaporean celebrities such as Mediacorp artiste Elvin Ng and Fashion Director Daniel Boey graced the Cirque’s Red Carpet premier on 5th July. Families, couples and people young and old also flocked to see the magic on the first night.

With one hand holding a champagne glass and the other gripping a box of overflowing salted popcorn, we excitedly made our way as spectators into the grey-and-white tent. One step into the tent and we were immediately transported to a whimsical steam-punked universe. From that moment, we knew our Friday night will not be an ordinary one.

One of us was even serendipitously nominated by a backstage crew member to cross over a bridge on set (part of the props on stage) before the show began. The shaky bridge required the randomly-selected members of the audience to use both hands to hold the handles. My sweaty palms did the task with ease as my mind was preoccupied with how close the stage is with the spectators. It was only then I realised the elevated stage has since been levelled, exchanging the Cirque’s signature trap doors for a performance space that puts performers at the audience’s eye level, creating a more intimate experience.

Above the audience was a giant clock. When the clock struck 11:11, the gigantic clock on stage soon ticked loudly to signify the start of the show. With that, time was in the hands of the troupe of Kurios.

In this show, a traveller known as The Seeker searches for his next adventure and discovers a hidden world inside his cabinet of curiosities. In this alternate universe, we met the Curiosistanians and their leader, Mr Microcosmos. Joining this cast is one of the ten smallest people in the world— Rima Hadchiti, who is 1 metre tall and weighs 18.5kg— as Mini Lili.

The Cirque puts a new spin on the classic aerial acrobatic stunts with the aerial bicycle. Holding on to a bicycle, an acrobat performs tricks in the air. With the Upside Down World, everything is terbalik (the way Singaporeans relate when one’s shirt is inside out)! The characters soon realise that there is a parallel world right above them as they’re having dinner. The scene began light-heartedly but soon turned into an exciting competition as both sides compete to pull off the most tricks and impressive feats. Be prepared to crane your neck to see the stunts perform 20 metres high above the ground inside this cosy tent at Big Top in Bayfront Avenue, next to Marina Bay Sands.

Another memorable act is the hilarious Invisible Circus, where a solo actor combines his impeccable comic timing together with audio and visual cues to give us the illusion of an invisible circus. No animals were harmed in this segment. We were assured.

Contortion is a crowd’s favourite. Four deep-sea creatures on a Mechanical Hand put human limits to the test with this segment. The contortionists make every extreme physical movement effortless. It was a captivating performance for the both of us as we watched in awe. Now, whenever I stretch to touch my toes I think twice before lamenting.

Alas, the show ended in a tick of the minute hand based on the gigantic clock on stage. Time may be relative in this circus, but it is running out in the real world.

The show lasts till 5th August 2019 so get your tickets from Sistic at https://www.sistic.com.sg/events/kurios0819 asap. The clock is ticking! Kurios: The Cabinet of Curiosities is an event NOT to be missed.