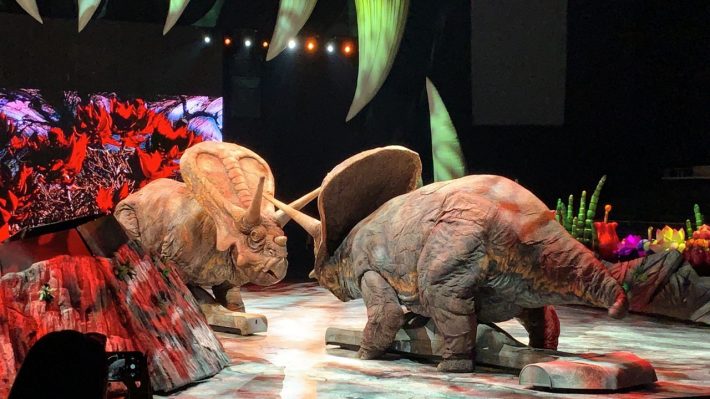 Get ready to travel back in time – 65 million years to be precise – and experience a world where dinosaurs are king. Walking with Dinosaurs: The Live Experience is bringing 18 types of prehistoric pals to life in the Singapore Indoor Stadium from 31st August to 8th September 2019. For our readers who normally watch concerts or musicals, this is truly a unique live experience that is not to be missed!

Walking with Dinosaurs is known to many as a popular BBC documentary series. The Live Experience brings these same dinosaurs to the stage with the help of gigantic animatronics and amazing life-like dinosaur suits. This live show costs over $20 million to produce and has been seen by more than 9 million people (and counting!) in 250 cities around the globe. Hosted by a character, Huxley the Paleontologist, the live show continues to present information in an engaging way. The audience will be able to learn more about the world and its inhabitants from a time before humans walked the earth. They will also learn all sorts of facts about dinosaurs and their environment they lived in, from how flying dinosaurs were able to exist, to how fossilised footprints allow palaeontologists to learn about dinosaurs millions of years after they went extinct.

The techniques used to bring these creatures to life is truly incredible and the show is constantly updated to keep with the times. For example, the Baby T-Rex now sports a feathery coating, as suggested by the latest developments in palaeontology. These dinosaurs are true to size and absolutely gigantic, pretty much filling up the entire stage at the Indoor Stadium. Smaller dinosaurs like the Raptors or a Baby T-Rex are puppeteered by fantastic actors whose swift movements and sharp noises will you make you feel like there’s a real dinosaur right in front of you.

The larger dinosaurs are piloted by a team of 3 people – one to control the dinosaur’s head and tail movements, one to control its sounds and smaller actions, and another to drive the entire beast. The largest of them all is the adult Brachiosaurus at 11 meters tall and 17 meters long.

Surely, these dinosaurs are awe-inspiring on their own but what truly makes the Walking With Dinosaurs live show so theatrical and engaging is the fact that each major scene has an overarching storyline. For example, audiences will get to learn about the Torosaurus and get to watch a fight for domination between two Torosauruses. Watch the Brachiosaurus in action as she protects the baby Brachiosaurus in a showdown with a well-known, carnivorous predator. Which dinosaur? Who wins the fight? What happens next? Find out at Walking With Dinosaurs: The Live Experience.

Get your tickets here at https://www.sportshub.com.sg/WWD2019 now!