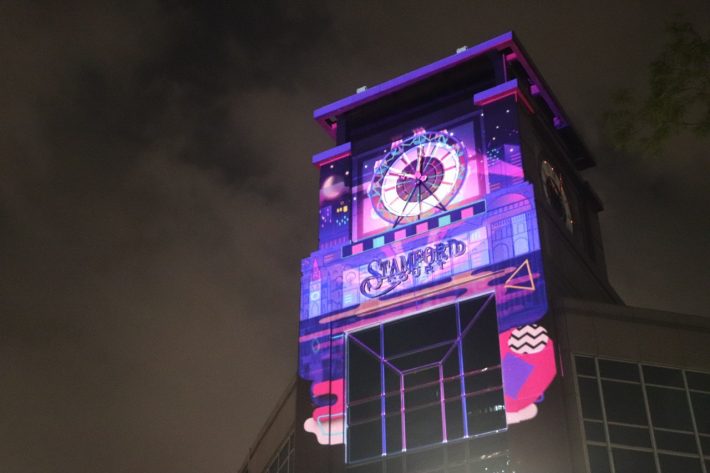 Once again, the night was lit up over the Bras Basah-Bugis district, with art installations and live performances as part of the highly-anticipated, annual event – the Singapore Night Festival. Stretching from Dhoby Ghaut Green to Raffles City Shopping Centre, the festival spanned across most of the arts and heritage district, encouraging Singaporeans to explore this significant district and its unique charms.


Of course, there were the festival’s signature gigantic projections – colourful, moving visuals projected onto the facades of iconic buildings. There were images of cultural elements and beautiful landscapes on the facades of the National Museum, CHIJMES and the Stamford Court clocktower.

A highlight of this was the short performance, @THISISEMERALDGIRL. Written as a contemporary response to Stella Kon’s classic one-woman play, Emily of Emerald Hill (which we’ll also be covering in this issue of Artjam!), @THISISEMERALDGIRL is a one-girl show starring Singaporean YouTuber, Brenda Tan. In it, Tan stars as Elisabeth Gan, great-granddaughter of the original Emily, as she works to preserve her grandmother’s beloved house and her family’s legacy through her social media channels. It was an interesting experience to see a modern version of this classic play, and Tan pulls off the role of a social media-savvy socialite extremely well.

Another highlight of this year’s edition was the pipe organ demonstration held at the Cathedral of the Good Shepherd. The church’s organist took the crowd through a quick history lesson about this specific pipe organ and how it had been upgraded over the past century, before launching into his musical programme. Veering away from the church’s usual fare of sacred music, the organist played classics such as “The Phantom of the Opera” and local favourites such as “Home” and “Singapura, Oh Singapura”. Upon hearing these familiar tunes, the massive crowd went wild with cheers. There was also the church’s yearly display of candles spelling out the words “Peace and Harmony”.

The National Museum also had its fair share of insta-worthy installations. A notable display was a tree outside the museum which had the story of the Indian epic, The Ramayana, being projected on its facade. A personal favourite of mine is the Disco Walkway at the walkway along Stamford Road leading up to Raffles City Shopping Centre, where silhouettes of people boogied down to popular disco hits.

Over at Armenian Street, a crowd gathered to buy indie goods and listen to live music. We got to see The Rejects, an art exhibition at The Substation selling works of art that had been rejected from various open calls. Accompanying each piece’s description was a short writeup on how each artist dealt with their respective rejections. From printed poems going for just $1, to wall-sized sketches of blogger queen Xiaxue, The Rejects had a wide variety of pieces available. At the end of the exhibition, visitors are invited to write about one of their own rejections and to add it to the wall of rejects. The premise itself is an interesting one as it invites us to question our own abilities to deal with rejection and how we decide to reject something as ‘not good enough’. Let’s hope that The Rejects becomes popular enough to warrant a second edition next year.