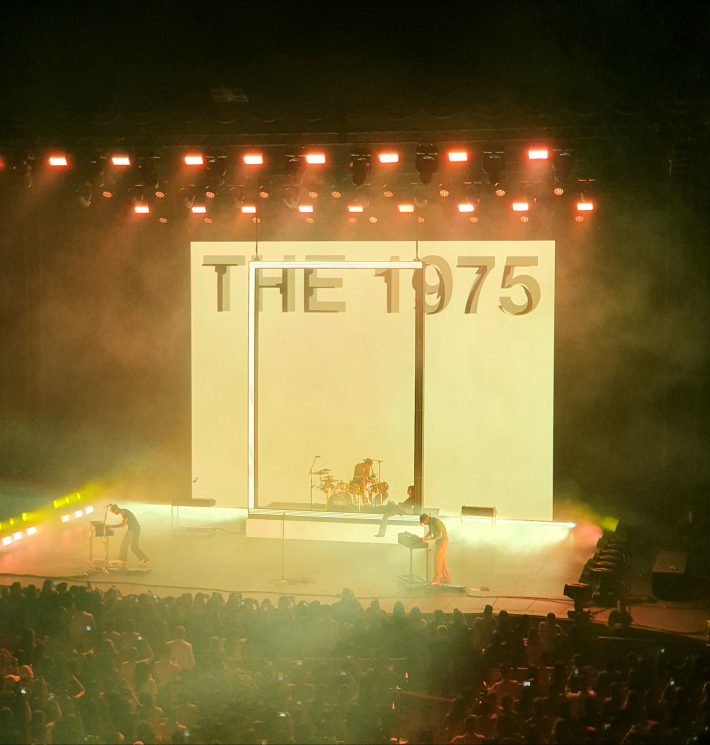 UGH! The 1975’ sold out show in Singapore left many anguished in the sweetest way possible. Here’s a Brief Inquiry Into that magical Monday night on 16 September 2019 at the Star Theatre. Oh, beware of the song lyrics and references, I couldn’t help it.

For the opening act, fans of The 1975 found it no surprise that No Rome kickstarted the show. Hailed as singer Matty Healy’s “muse”, the blue-haired Fillipino musician set the tone of what was to come. The stage was hazy like a dream, painted like a lilac sky. We were 30 minutes into his performance and yet the actual performance had not begun. Nevertheless, the crowd’s energy was already so high, it almost felt like that opening act itself was the entire show. The songs he played were Do It Again, Saint Lauren, Cashmoney and Seventeen.

There was a short intermission before The 1975 finally stepped on the stage, but we heard the familiar lyrics first, in the darkness. While the lyrics were simultaneously projected on the screen, us fans already knew the verses by heart.

The bright lights and lyrics flashed in white against the black stage and screen.

Step into your skin?

I rather jump into your bones

If there’s one thing to be said about The 1975’s stage set-up, it was this: The stage was minimal, yet memorable. A fixed huge screen was anchored on set and it displayed multicoloured television static or occasionally, images of clouds or flowers which echoed the imagery of the songs played. The band’s setlist featured their previous and upcoming sonically cohesive albums; and they brought their songs back to life by a simple switch in colour.

Midway through the performance, Matty spontaneously changed the setlist a bit, citing that this concert was the last show off their Asian tour. They inserted a crowd’s favourite— Paris— and neon pink lights replaced the initial black and white aesthetic on stage. This is to represent the second album (my favourite): I like it when you sleep, for you are so beautiful yet so unaware of it. The songs from this album mirrored this similar aesthetic, such as the likes of Somebody Else and Change of Heart.

The audience— mostly packed with millennials (you can roll your eyes now)— stood, sang and screamed their hearts out to every song in the setlist: both ‘the classics’ and the new hits. So what are the classics? These iconic songs defined the band in the earlier breakout phase of their career. Think Girls and Chocolate. There was an air of nostalgia. Nothing compared to the performance of Fallingforyou and Robbers. The stage was filled with smoke, a memory of a not so distant past.

I found this absurd at first, but eventually deemed it to be fitting; in alignment with The 1975’s rhetoric. In the theme of technology and modernity in this album, the clean white crisp flashes of white lights revealed a cutting take on the harshness of the 21st century. “Modernity has failed us”, belted the rock band unapologetically in Love It If We Made It. This particular lyric hit ever so much harder listening to it live.

But the first single of their upcoming album featured a speech about climate change. The speech by 16-year-old Swedish activist Greta Thunberg was played and a video-documentary accompanied the 5-minute track. This upcoming album (Notes on a Conditional Form) was foreshadowed in bright blinding yellow hues— with the song, People. Through this, we were no longer the audience, but part of humanity, with the band urging us to take action before it was too late.

In a lot of ways, their music and aesthetic speak about the exasperation and experiences of youth. Someone in the crowd had the same replica of the rabbit-beanie Matty donned for his performance of Sincerity Is Scary. We are more alike than we seem, the band seemed to suggest cheekily.

“So what about these feelings I’ve got?” sang Matty.

And the crowd sang back, “I couldn’t be more in love”.