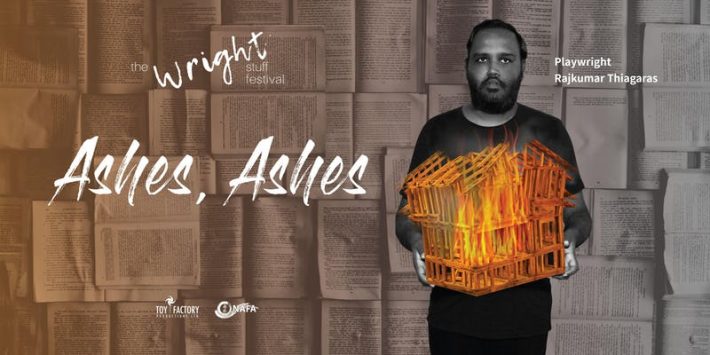 We got chills. Not from the air-conditioned NAFA Studio Theatre, but from the incredible poignancy of the second play in Toy Factory Productions’ The Wright Stuff Festival 2019: Ashes, Ashes by Rajkumar Thiagaras. Fraught with emotion, the play charts the journey and the memories of the protagonist Janaki (played by Daya AJ) as she revisits her childhood home — the Janaki Vilas — before it is sold to be demolished.

What first struck us as we stepped into the blackbox, was the set that reflected the setting of the entire play: the living room of Janaki’s home complete with Indian traditional music playing. It truly felt like we were in the living room too. This intimacy was further emphasised at the end of the play when the chorus members cordoned off the house for its demolishment, separating the cast and set from the audience. This use of space was an interesting touch that made the play more immersive.

Ashes, Ashes follows the journey of Janaki from when she was a child growing up to her marriage and even her death. All stages of her life were brilliantly and flexibly brought to life by Daya AJ, not only by her acting, but also by effective costume changes. Ageing was not the only form of character development we got to witness; emotional development was equally important in conveying the heart-wrenching emotions that define Thiagaras’ work. At one point, a chorus member draped a white cloth on Janaki, signifying both her ageing as well as the eventual lifting of her emotional burden. The change was beautiful to see and only went to show just what a wonderful job Daya AJ did in portraying Janaki.

Janaki’s past was told in a story-like manner and we relived it together with her. The use of theatrical elements was excellent, such as when her memories were personified and concretised by the chorus members who played the flames that engulfed her siblings. Although simple, the visual element of play was interesting to watch and showcased the chorus members’ versatility in playing both human and non-human roles in the same production.

What was indisputably sublime, however, was how Indian culture played a distinctly integral role. From the music of Janaki’s childhood and the ever-present vibrant traditional costumes to the drawing of the kolam by Janaki and her siblings, Janaki’s culture was always at the forefront, winning the audience’s widest smiles or evoking the most indescribable pain in us as we experienced Janaki’s life vicariously through Thiagaras’ seamless integration of such colourful elements.

Dealing with the conflict of the past and the present, modernity and tradition, Ashes, Ashes asks us this: How do we move on from the past to face the present? The answer presented in the play is that we inevitably have to let go of the guilt and the hurt that weighs us down. After all, while some memories are worth keeping, there are some that we do have to burn down to Ashes, Ashes.