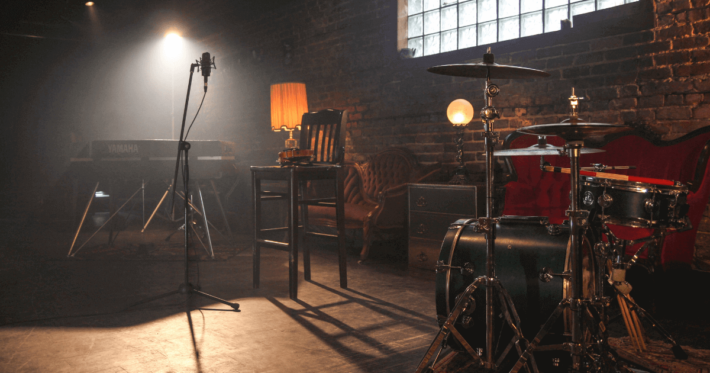 Singapore’s local indie music scene has been revitalised after safe-distancing protocols were loosened up early this year. Before 2020, many local gigs were held almost every weekend in bars, inside industrial buildings, or arts venues like The Substation. New and old bands alike would perform. You’d see the same people from last week’s gig show up for the next one– regardless of the bands performing or the venue. The scene was pretty tight-knit, but also very welcoming to newcomers (as long as you were friendly and vibed to the songs!). However, the two years of lockdown forced venues to close, and local bands had nowhere to perform. Now, with gigs returning, the scene is almost back to what it used to be.

Great Mass Of Colours really reminded me of the intimate, pre-pandemic, gigs that I used to frequent with my friends. The venue was secret (you had to message the bands on Instagram to find out where to go), tickets were only sold at the door, and people queued pretty early before doors opened. The venue ended up being a cosy studio space inside an industrial building at Kaki Bukit, while the line-up was a mixture of new and familiar bands. I hadn’t listened to all the new bands’ music before coming to the show, but I was excited to find more local bands to support.

Curb, the opener, is one of the new bands playing songs from their debut album “Hope You’re Doing Well Michaela”, the trio arriving on stage with energy and gusto. Their melodies are tinged with an early 2000’s pop-punk sound: distorted guitar chords strumming in unison with the bass. Their sound is highly reminiscent of early Paramore, particularly their debut album “All We Know Is Falling”. My favourite songs from them were 2020 and Become Again. The breakdown at the 3 minute mark for 2020, paired with the key change, bittersweetly carries the song to its end. For “Become Again”, the vocalist screams his heart out, crying out: “Guess I’ll see you again / Just to become again”. He’s nothing without his ex, but overcomes this after the math-rock-y riff and cheekily says “**** it, I’ll just play some PUBG”. Wanting to hear more from them, I immediately saved their album on Spotify after the gig.

Carpet Golf, is a newer band comprising some members from bands Subsonic Eye, the Neptune Waves and Charm. They describe themselves in their Bandcamp page as a “four-piece friendship-core band” – and it’s evident in the way they perform. The quartet clearly have chemistry, bantering on stage between songs and the crowd loves it. Most of their songs were under two minutes, adorned with charming riffs, emo vocals and energetic drums, leaving us with no room to rest (in a good way!). It was a one-of-a-kind experience being part of a crowd that jumped and sang to cheeky lyrics like “Brock [Lensar], I wish I was you / [Don’t] get me wrong, [I] like being me, but sometimes, / I wanna be a big meatball”. Listening deeper reveals more to these goofy lyrics and sugary melodies. There are criticisms of the unrealistic expectations of masculinity thrust upon men. The subtle way this issue is addressed mirrors how many men in reality aren’t able to be vulnerable (or serious) with their insecurities too.

Krunkle’s guitars immediately keep the energy flowing and the people dancing. With mind-boggling math rock riffs and catchy melodies, they electrified all of us the moment they played the first note. Even though it was my first time listening to them perform, I couldn’t help but head-bang and jam to their tunes. Despite only debuting this year, the band has already opened for major acts like fellow local indie band Sobs and Norwegian singer-songwriter JAKOB. I couldn’t catch the song names, but their catchy, polyrhythmic riffs and ballistic drums definitely stuck with me.

Spacedays floats up on stage and delights the crowd with tropical guitars and funky basslines. The vocals are flowy, perfectly complementing the bright guitar tones. Meanwhile, the tight drums and funky bassline tie their sound together into a neat, groovy package. Their song “Lucy’s Space Garden” was my favourite. The song mixes indie rock, psych-rock and adds a tinge of funk to create a unique, fresh sound. Though I don’t usually listen to their genre of music, Spacedays commanded my attention from the start of their set to the very end.

The gang is back from their American tour, and they’re back with a bang. A mosh pit already forms from the first song. Someone pretends to film them but swipes on OKCupid instead, holding his phone screen up for everyone behind to see. The screen lights up: it’s a match! And the crowd goes wild. Of course, someone in the crowd has recorded all of this on TikTok. Shenanigans like these aren’t uncommon during Subsonic Eye sets. The band has a loyal following (that they frequently banter with) and is one of the most popular local indie bands in Singapore. It was nostalgic seeing them perform live up close again, as they were one of my favourite acts to watch before the pandemic. The band used to play many intimate gigs not unlike this one back in 2018, but slowly branched out into bigger stages. Eventually, they even made a name for themselves overseas — in Southeast Asia first, then the United States. They’ve definitely come a long way.

Just when you think everyone’s out of energy from watching the previous bands, Saints Among Sinners come on stage — and the room is recharged ready to party. The seven-piece band are definitely no strangers to the audience; most people know all of their songs by heart. Their infectious energy galvanised the crowd — everyone was either punching the air to the beat, moshing from wall to wall, attempting stage-dives or singing their lungs out with the vocalist. With that last electric set, the gig comes to a close, leaving me with another bout of post-concert depression. Luckily, there are  more local gigs and festivals to come later this year!