Skip to content
Loading...
Latest articles
Searching for a National Identity through SGIFF’s Singapore Panorama Short Films
To Laugh Or To Cry? SGIFF’s Opening Film ‘Assault’
What’s it like to run a film festival?
For My Highness – Sex, Drugs & A Mother’s Prayer: Interview with director Adeeb Fazah and playwright Shaleihin Pi’ee
‘The Almighty Sometimes’: Searching for Identity Amidst the Chaos of Mental Illness
CAC Events 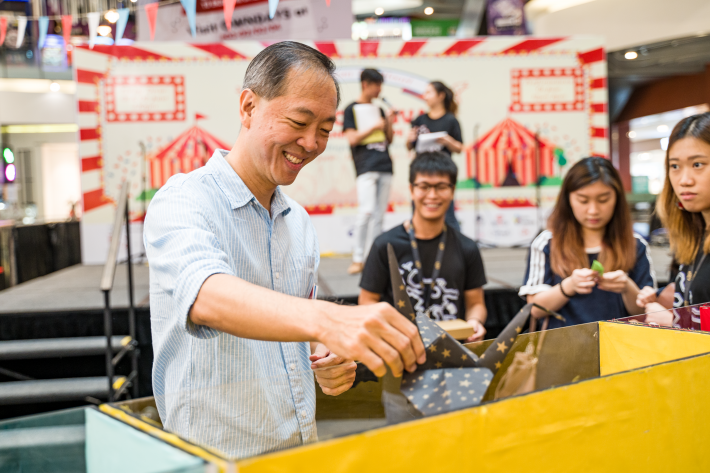 “Not all of us can do great things, but we can do small things with great love”

In the spirit of doing small things with great love, hundreds of participants, both young and old gathered at Bugis+ mall for NTU CAC’s Arts from the Heart Charity Carnival on 1st June. Representing the charity arm of NTU CAC, Arts from the Heart (AFTH) has had a long tradition of using the arts as a platform to raise funds and awareness for numerous beneficiaries across the years, with this year being no different. For the first time, the event spanned over a two day period from the 1st to 2nd June, with the organizing committee revamping the event by bringing the carnival indoors, lining up the event with numerous performances and booths to raise funds and awareness for the Singapore Cancer Society (SCS).

Centered on the theme “Crane for Hope”, the carnival embodied the theme both literally and figuratively. As part of AFTH’s fundraising efforts, participants were encouraged to fold origami cranes and to subsequently drop them in a sculpture which spelled the word ‘HOPE’. With every origami crane made, $2 was donated by main sponsor Young Scientists and upon completion of the HOPE sculpture, main sponsor Winstons Engineering would donate $4000 to SCS. As these donations would be used to support SCS’s cancer treatment fund and welfare aid, it was certainly moving to witness people from all walks of life completing the letters H.O.P.E with origami cranes in an effort to extend a helping hand to cancer patients as well as survivors. In addition, the creation of the communal piece of art was a unique and inspiring sight to behold.

The wide array of carnival booths were also a highlight of this year’s AFTH, whereby all proceeds from the carnival ticket sales were also donated to the SCS. Comprising of an arts corner and several game booths, there was an activity for everyone to enjoy.

For the arts corner, there were four activities: “Perler Beads”, “Dream Catcher”, “Sand Jar Art” and “Henna”. Personally, I enjoyed the “Dream Catcher” and “Sand Jar Art” activities most because I got to make and customise dream catchers and sand jars to my liking. Furthermore, as I was seated next to many young children, their innocence and fearless creativity were also inspiring, especially when they played with the colourful yarn, feathers, and sand.

As for the game booths, there were also four options: “Plinko”, “Ride on Time”, “Hit the Teeth”, and “Laser Tag”. I was particularly impressed by the amount of detail and innovation that went into each game booth. This was especially so for “Plinko” which featured a stunning Singapore-inspired artwork as the booth’s backdrop, as well as “Ride on Time” which featured a moving toy train that was attention seeking.

Apart from the carnival booths, live performances were also put up to entertain the public. This included dance items by NTU CAC Contemp{minated} and NTU CAC Lindy Hop, as well as music performances by NTU CAC Harmonix and several NTU hall jambands.

All in all, it was a humbling experience to be part of this year’s AFTH and to give back to the community. Big or small, each and every contribution at the event will go a long way in changing the lives of cancer patients and survivors. So what are you waiting for, donate to the Singapore Cancer Society at https://www.singaporecancersociety.org.sg/get-involved/donate.html or be a part of next year’s Arts from the Heart!