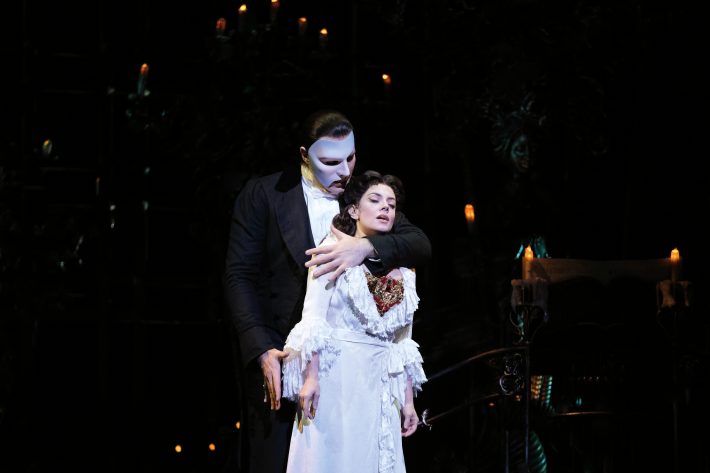 The longest-running show in Broadway history has touched the hearts of over 145 million people across the globe. And now, the world tour of The Phantom of the Opera is stopping by Singapore from 24 April to 8 June 2019 at the Sands Theatre at Marina Bay Sands. We were honoured to be at the Media Call and Masquerade Gala, where we were greeted with a complimentary rose and a masquerade mask, right before its debut on the night of 25 April 2019.

Set with more than 230 spectacular costumes by the late Maria Björnson, this musical, which has clinched over 70 major awards, will bedazzle you with the characters’ chemistry, most notably the iconic love triangle between the Phantom, Christine, and Raoul. Be prepared to be moved by the iconic music of Andrew Lloyd Webber, conducted by David Andrew Rogers, as the strong international casts joined forces with Singapore’s own full 11-piece live orchestra. It is a tradition that they feature local orchestras in each country that this musical tours. The unsung heroes of the musical –with only three days of practice– flawlessly delivered the soundtrack of the musical with perfect precision.

We also got the chance to speak with the team behind the show and interviewed Matt Leisy, who plays Raoul, Christine’s childhood sweetheart. He resonates with this romantic character, and quotes the lyrics from his romantic ballad with Christine in ‘All I Ask Of You’.

“ “Let me be your freedom” is such a poetic way of saying to somebody that we need to be together and we are better together,” he said.

Prior to this, the Media Call that afternoon brought us backstage where the magic happens. We were given the chance to see how the production stayed true to the classic stage design, despite the difficulties faced to produce the original set down to every detail while touring the world. In particular, the chandelier was a difficult prop to set up. The crew needed a ceiling to hang it from, which was not always possible in older theatres. In New Orleans, they had to cut a hole in the theatre’s roof to hang a chandelier from a crane, the assistant director Rainer recalled. With technology, the chandelier now is much lighter because it is made with carbon fibre unlike the original prop made out of pure aluminium.

Besides the chandelier, there were also other magnificent sets which matched the various iconic scenes of the story, and we were left in awe as the magic unfolded before us. The enchanting music, poignant story and regal sets affirmed one thing — the Phantom family of 130 cast, crew and orchestra members is here in Singapore to deliver a masterpiece.

This production has left us haunted, mystified and in awe, and the timeless tale of The Phantom continues to live on in our hearts. Once certainly does not need to be a frequent patrons of musicals to enjoy this charming production. Phantom of the Opera (link the SISTIC) runs from now till 8 June 2019. Don’t phantom this!