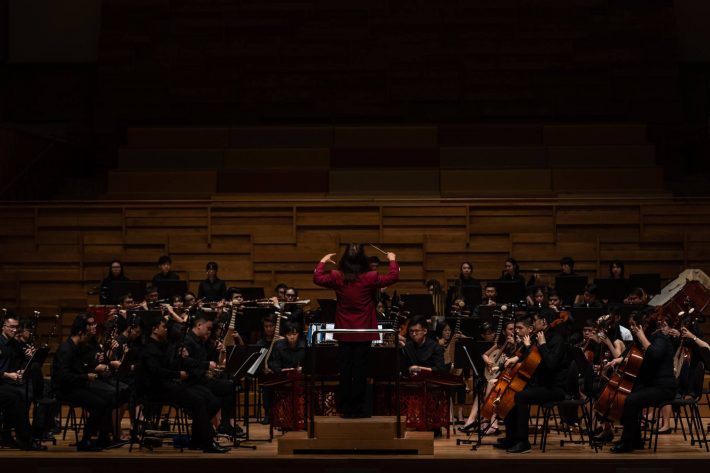 When you think of millennial popular culture, one thing that definitely won’t cross your mind is traditional Chinese music. And yet, despite our generation’s thirty-second attention span, coupled with a need for the next newest thing, this art form has proven to withstand the test of time, and is continued to be performed even today; in this case, by this particular group of youths who comprise NTU’s Chinese Orchestra. Testament to this is the Orchestra’s annual concert ‘Transient Reminiscences’, which has been conducted with the purpose of preserving Chinese music heritage, as well as promoting a greater appreciation for classical Chinese music among the general public since its inception in 1997. This year’s concert, which was held on April 7 at the School of the Arts (SOTA), was its 22nd installment.

In the dimly lit halls of SOTA’s performing theatre sat the audience, their eager faces illuminated blue by their smartphones in one hand and in their other, clutching gerberas, whispering excitedly about who they were here to see. I appeared to be the only one not expecting to see anyone in particular on the stage, not even knowing what to expect at all. It had been a long time since my last encounter with Chinese classical music. As the house lights went fully dark and the performers eyed Conductor Ng, anticipation hung heavy. The first note of the concert rang loud and clean, dispelling any illusion that orchestra music was dull and dreary. The song that ensued was a fitting introductory piece as the dramatic build-ups piqued the audience’s attention. Aptly titled Aspirations, its vibrant notes rightly captured the spirit of youth: bursting forth with energy in search of adventure.

The sense of drama brought forth in that robust opening lingered throughout the rest of the concert, prominent in other animated tunes like Festival of the Mountain Village, and culminating in perhaps the most striking performance of the repertoire: Cadence of Drums. A flood of blue stage lights greeted us upon our return from intermission, the theatre otherwise pitch dark. Ten masked performers stood eerily still in front of varying sizes of drums, and commenced the second half of the concert with simultaneous reverberating drum beats. It was truly a sight to behold, and the Orchestra proved that drama was not the only type of performance it was capable of giving.

The piece that was probably the most germane to the theme of the concert was Childhood Reminiscences, a tranquil song that led the audience gently into the mood with a simple melody from a single glockenspiel. The notes bounced lightly off the metal instrument as if they were mimicking the first few steps taken by a child, before a chorus of strings enveloped us in a tune stark with a theme of longing that seemed intent on reminding us of the simpler times while growing up.

As the concert came to a close and audience members filed out of the theatre, I observed the same excited chatter from family and friends; mentioning the performances they enjoyed the most, or laughing good-naturedly about how serious one of their friends looked while playing their instrument. This made me reflect upon the nine pieces of music presented in the last two hours, and I found myself curious about the kind of music played by Chinese Orchestras, in comparison with my prior knowledge about classical music. While texting a friend about the show, I paused and realised that the Orchestra had to some extent, achieved their goal of wanting to capture the general public’s appreciation for their music. In the leaving crowd, most of us were talking about their craft and the melodies we heard, even among the teenagers which I would have previously assumed to be indifferent to this traditional art form. Overall, the NTU Chinese Orchestra gave an exceptional introduction to classical Chinese music for the clueless like me, and to their family and friends — a performance worthy of their pride and applause.