Skip to content
Loading...
Latest articles
Searching for a National Identity through SGIFF’s Singapore Panorama Short Films
To Laugh Or To Cry? SGIFF’s Opening Film ‘Assault’
What’s it like to run a film festival?
For My Highness – Sex, Drugs & A Mother’s Prayer: Interview with director Adeeb Fazah and playwright Shaleihin Pi’ee
‘The Almighty Sometimes’: Searching for Identity Amidst the Chaos of Mental Illness
Special FeaturesTheatre

Paris. Whether it be films like Midnight in Paris or trashier binge-worthy shows like Emily in Paris, the capital of France has become synonymous with the romantic life. After all, it is the city of love. One dreams of a honeymoon there or securing a lock on Pont des Arts as a promise for eternal partnership. Even those who are single cannot escape the seduction of France. The city’s romanticism allures all – from the pace that transforms our usual grinding unstopping gait into a slowed gentle stroll, to the sidewalk cafes offering a library of faces amidst pages of inviting scents: coffee, pastries, greens.

For all the flashiness mass media has depicted France with, imagine all these expectations undermined. Such disappointments are demonstrated within the first minutes of Sing Theatre’s latest musical A Singaporean in Paris.

K.Q. (played by the immensely talented Hossan Leong, who also directed the musical) heads to Paris in pursuit of his music career. Amidst the bureaucracies and adjustment issues, he declares: “Paris is not what I expected.”  In spite of these setbacks, he finds a home in a cabaret filled with other dreamers from Singapore and the Southeast Asian region who have traversed the same journey to France in hopes of chasing the dreams that they have long romanticised. Among the crew, Anne (Ethel Yap)  runs the cabaret as the ‘mum’ of the group, Terry (Amin Alifin)  dazzles with his music and dances to guests of all genders, Sofia (Gaby Rae) is pressured by family in Malaysia to return for marriage, and Edmund (Peter Ong) goes from a lonely cabaret audience to beloved cabaret performer. Though vastly distinct in their backgrounds and concerns, these five characters become united in their common pursuit of the dreams that Paris represents for them, be it a career or companionship. 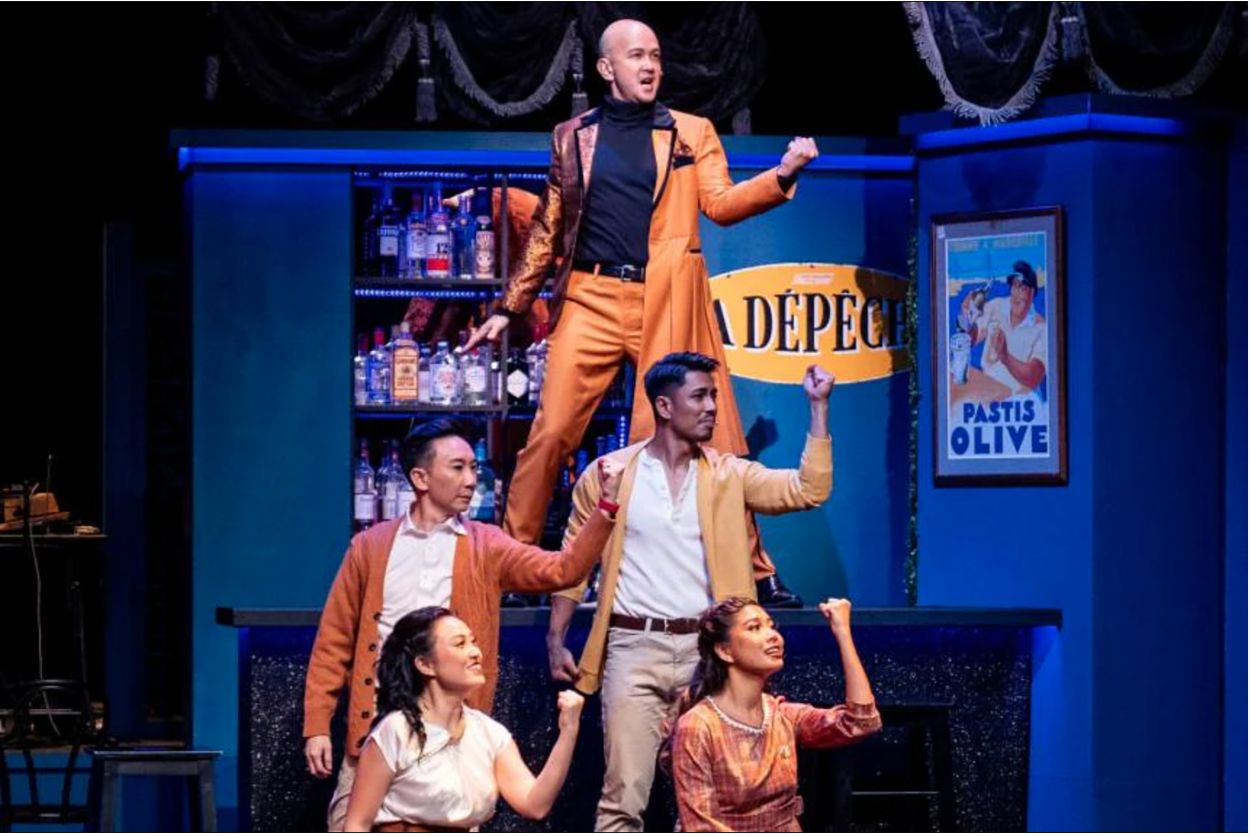 The dazzling spectacle of the Parisian cabaret (Photograph: Sing Theatre)

For those of us stifled by and unsatisfied with the mundane dreariness of Singaporean life, it is difficult to not yearn for the promises of an exotic land. As the musical shows, the capitalist rat-race encapsulated by our 5Cs (cash, car, condominium, credit card and country club) can so easily become subverted by the finer pleasures and appreciations of the 5Cs of Paris (cheese, chocolate, caviar, champagne and conversation). The anchoring of the play around K.Q.’s comedic narration of his experiences in France, therefore, becomes a focal point all Singaporeans who have dreamt of a better life can relate to: the hopes, the disappointments, and the eventual perseverance to make that life possible anyway.

Yet, when the characters’ arcs prove that dreams need not be pursued only in Paris when the cabaret’s substitute family sees the return of some members to their homeland, the musical is a reminder that dreams can be built in Singapore too. Earlier in the musical, Hossan Leong jokes that the cabarets of France cannot compare to the karaoke bars of Singapore. However, in the same way, the cabarets become a place of escape and comfort for the forlorn seeking company serving as a place of respite for the performers seeking expression, we are reminded by the end of the musical that as out of reach as Paris is, there is magic closer to home too. As much as the play is about a Singaporean in Paris, by the end of the musical, we find that there is a Paris in Singapore too.

Beyond karaoke bars, where else can that enchanting experience be found in Singapore? The theatre, of course. The stage design of this musical places the orchestra and actors on the same plane in front of the audience, inviting comparison to the staging of an actual cabaret. It is as if the audience members have also become a part of the cabaret performance, moved by the beautiful renditions of both famous and invented songs. The magic of the stage that allows us to imagine another life can go from something as simple as how the actors transform barstools into park benches, or something more meta like re-staging of a sold-out show from 2014: A Singaporean in Paris that breathes new life to the play and our everyday too. Indeed, amidst a time of global political and financial crises, Sing Theatre’s latest staging is a dazzling, heart-wrenching and toe-tapping embrace for all of us dreamers hoping for some magic. It is time to return to the theatres, and there’s no better place to start than this show. 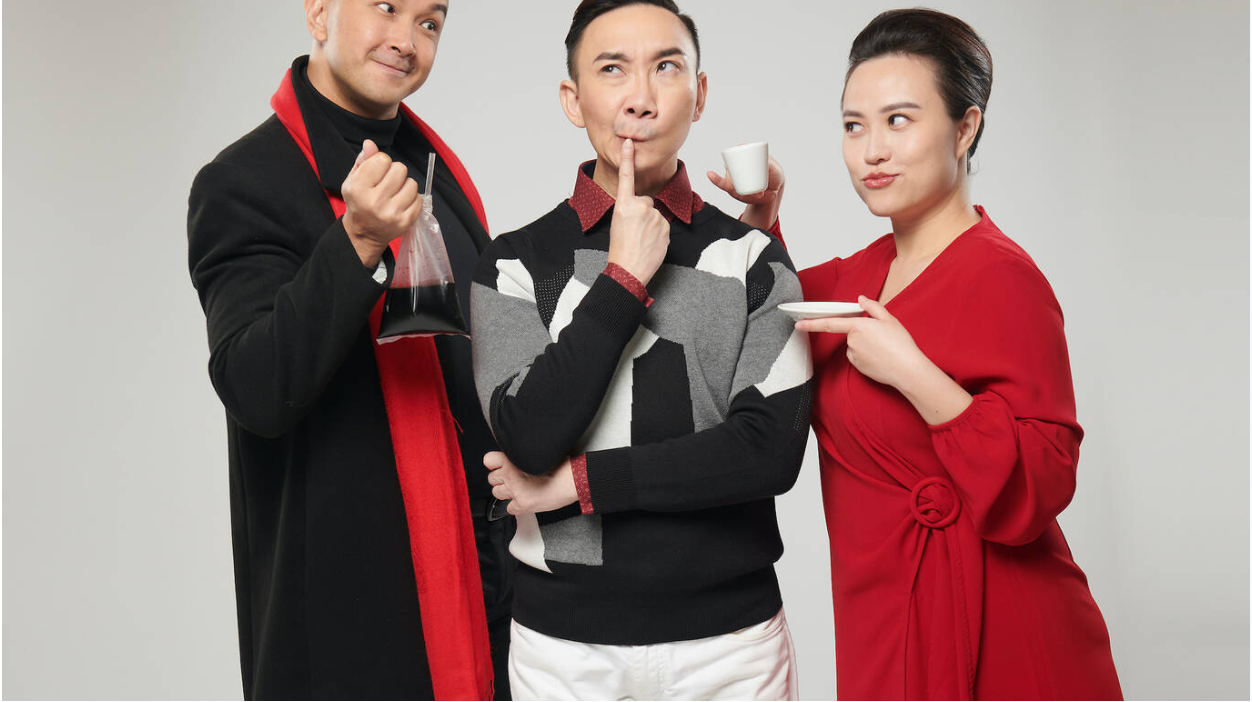 The show-stoppers amongst the incredible cast (Photograph: Sing Theatre)

For those of us who are dreamers, this musical will be a comfort to us. Until our dreams become reality, all we can do is wait, just as a hit number in the musical posits: “Je t’attendrai, comme d’habitude.” I will wait for you, as usual.

In the meantime, the theatre and this show wait for you.

The musical runs from 2 November to 13 November 2022 at the Drama Centre Theatre. Buy your tickets on SISTIC now.